I am posting this to share what is going on currently in NY with heraldry. I am not taking any sides in this discussion politically, except to say this is just plain ugly! (IMHO)

Commemorating a friendly wrestling match seems (to me) a nice idea, and would be less offensive if done more artistically to actually look like a wrestling match.
Joseph McMillan
Alexandra, Virginia, USA
Top

I dislike these so-called "seals", which are I suppose most nearly heraldic badges. I doubt that most of them were ever seals, simply a more or less naive picture in a circular frame. There are so many talented artists in the US and so few of them have, it seems, ever tried to design really striking badges. I suppose there was and is an understandable resistance in many places to a return to heraldic achievements, coupled with a long period until recently when there was a dearth of american heraldic artists. As for using "seals" (often coupled with writing) on State flags ....
Chris Green
IAAH President

I have to disagree--most of the things resembling this that belong to state or local governments really are seals and used as such, i.e., impressed onto a wafer or the paper itself to authenticate documents. The style of this one, representing human figures, is consistent with the obverse of the seals of most of the crown colonies before Independence, which typically showed an effigy of the British monarch with one or more figures representing the specific province presenting an offering of the products for which the province was known--furs for New York, tobacco for Virginia, rice for South Carolina, and so on. (The royal arms were on the reverse.)

In my opinion, the esthetic problem arises when non-heraldic seals are employed to fill the role better filled by coats of arms. But there are historical reasons why things evolved as they did, and those in the U.S. who would like heraldry to be more widely used would be better advised to propose arms to be used alongside the seals rather than to replace them. Existing symbols that have been used for decades or centuries tend to be defended tenaciously as "a poor thing but mine own."
Joseph McMillan
Alexandra, Virginia, USA
Top

Sorry Joe - and others residing west of the pond - I was showing off my old world prejudice in my previous post, for which I offer my apologies.

UK local government entities (cities, former boroughs etc) do indeed have (or had) seals as they were required to do when granted their Charters of Incorporation and are still required to have under the Local Government Act 1972. Many seem to be heraldic, some like Whitesboro NY have curious origins, Penzance for example.

The difference seems to be that here seals seem pretty much to be restricted to their intended use, rather than used as a form of logo.

Incidentally, googling "town council seals UK" brings up at least as many towns that are proud of the local population of gray seals on their beaches as it does examples of the sort of seals we are discussing.
Chris Green
IAAH President

Back in 2011, I reported, on my Cheshire Heraldry weblog, the strange case of the seal of the ancient Borough of Much Wenlock, Shropshire.

Quite near to where I live is the rather attractive tourist town of Much Wenlock, which, because of its history, is entwined closely with The Olympics. Back in 2011, in preparation for the forthcoming London hosting of the Olympic Games, The London Organising Committee of the Olympic and Paralympic Games ( LOCOG) designed a toy mascot and called it “Wenlock”.

In October 2011 it came to my attention that Much Wenlock Town Council, successors to the ancient Borough of Wenlock, in Shropshire had copyrighted it’s seal and intended to licence its use to local organisations who wish to use it.

The ancient seal of the Borough of Wenlock 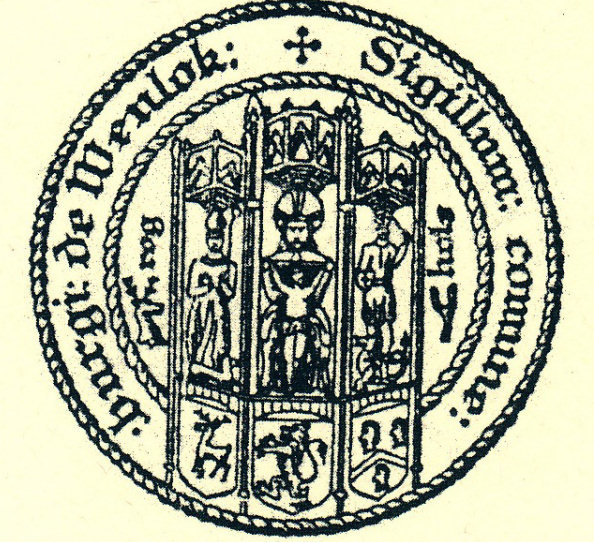 The Town Clerk, at that time, stated that “Use of the Seal is free to not for profit organisations. When the draft charging policy went to Council for approval Councillors could not agree on the charges. Some said it should be more and some said we shouldn’t let anyone use the seal.”

I am firmly in the shouldn’t let anyone use the seal camp. I find it quite bizarre that a corporate body should be allowing anyone to use its seal. A seal (which can feature a coat of arms but is not to be confused with a coat of arms) is the legal signature of the corporation and is used as means of authentication. It is a mark or symbol which is attached to a legal document. If I were a resident of Much Wenlock, I would be protesting in the strongest of terms that it is not at all proper for the Town Council to license the use of its seal to anyone. This is an ancient seal – I think that the original users of it would know full well what the purpose of a seal is.

I suggested most strongly to the Much Wenlock Town Clerk that it is not proper to take this course of action but, perhaps because I an not an elector of the Town, was not given the courtesy of a reply.
Martin Goldstraw
Cheshire Heraldry
http://cheshire-heraldry.org.uk
Top

I am 100% in agreement Martin. Indeed I wonder if, legally, Much Wenlock Council had the right to grant the use of its seal to anyone. If it were used by anyone other than the council to seal a document, it would be saying in effect: "We Much Wenlock Council approve the contents of this document". No other meaning could be acceptable in law. The opportunities for "passing off" once use of the seal is granted to others is greatly increased. It was for this very reason that formerly seals that were no longer to be used were broken or damaged.

This document sets out Much Wenlock's current policy, which on the one hand restricts the use of the seal under the Trade Marks Act 1994, and then allows its use by others for non-commercial purposes with the agreement of the Town Clerk. This derogation from strict ownership and use is simply asking for trouble. If "the man on the Clapham omnibus" or "Joe Public" sees MW's seal on something they are going to assume that it originated with MW Council, not phone up and ask if the Town Clerk had given permission for its use by others.

A question that flows from this whole topic is : what exactly is "the seal" itself? Is it
(a) the metal stamp or die itself, or
(b) the impression made by the stamp on a piece of wax or a wafer or on the paper, or
(c) a printed (or digital) image of the design of the stamp?

It seems that both (a) and (b) are seals, but is (c) actually a seal or just a picture of one, without legal significance?

One of the key points in the Manchester case in the Court of Chivalry in 1954 was the theatre's unauthorised use of the city council's arms on its seal as well as on its proscenium arch. The court drew a distinction between displaying arms and using them, and ruled that the use of the arms on the seal was a no-no (if you'll excuse the legal terminology!) because of the legal implications of sealing a document.
Regards
Arthur Radburn
IAAH Vice-President : Heraldic Education
Top

And a very good question too Arthur!

I would certainly say that (a) and (b) constitute the seal, since you cannot have (b) without the use of (a).

(a) The Keeper of the Great Seal of England and the Lord Privy Seal were the English monarch's most trusted courtiers, responsible for holding and protecting the physical seals and for their application.

(b) Any document that has a wax or wafer impressed with a seal is sealed and that wax or wafer becomes the legal seal. In these slap-happy times wafers are often accepted as seals despite not being impressed.

Which brings us to (c). Although in popular parlance this is usually called a seal, it is in my opinion simply a pictorial representation of the seal, since it is neither the physical device (a) nor the impression (b). The pictorial representation does not carry out the physical sealing, nor does it give the document on which it appears legalised status - or it shouldn't. Similarly a sealed document may subsequently be photocopied, but only the original is the legal document, unless the copy is itself legalised by the application of an original seal (and even then it is only legal insofar as it is confirmed to be a true copy of the original). Thus I would argue that the flags of several US States bear pictorial representations of the relevant State seals, whereas the documents that authorised the State flags were sealed to affirm their legality.

I recall that as a consular officer (and thus a Notary Public) I had to be very careful how I protected the consular seal and how it was used. A photocopy was never acceptable.
Chris Green
IAAH President

Chris Green wrote:UK local government entities (cities, former boroughs etc) do indeed have (or had) seals as they were required to do when granted their Charters of Incorporation and are still required to have under the Local Government Act 1972. Many seem to be heraldic, some like Whitesboro NY have curious origins, Penzance for example.

A practice exported to the colonies along with the English language, etc. The 1686 royal charter to the city of New York (issued by Governor Thomas Dongan under the seal of the province) provided that "the said Mayor, Aldermen and Commonalty of the said city of New-York, and their Successors, shall and may forever hereafter, have one common Seal to serve for the Sealing of all and singular their Affairs and Businesses touching or concerning the said Corporation." The seal adopted pursuant to the charter was engraved with the same coat of arms borne by the city to this day, apart from the substitution of a crest with an eagle rising from a globe for the royal crown after independence. (There are stories of this seal having been a gift of James, Duke of York, but I've never seen any substantiation. I suspect the locals just exercised their power to have a seal produced and that it never crossed their minds to involve a herald in the design of the arms.)

On the other hand, the seal adopted by the Virginia city of Williamsburg pursuant to its 1722 charter had no arms on it but rather a standing figure of the goddess Minerva. This device was also used as a quasi-coat-of-arms or badge on the city mace, dating to the 1750s, where it adorns one side of the bowl (the others bearing the shield of Virginia, the crest of Virginia, and the crest of then-governor Francis Fauquier). It was only in the 1970s that Williamsburg acquired a true coat of arms, devised by the College of Arms, which uses the standing figure of Minerva for the crest.
Joseph McMillan
Alexandra, Virginia, USA
Top
Post Reply
13 posts