Let's shift, then, to a few arms that won't generate political controversy--I hope.

Seton Hall University is a Catholic university in South Orange, New Jersey, operating under the auspices of the Archdiocese of Newark. It was founded in 1856 by Bishop James Roosevelt Bayley and named after his aunt, St. Elizabeth Ann Seton, nee Bayley. The arms were designed by William F. J. Ryan (creator of a significant amount of Catholic-associated heraldry in the U.S.). The main field is the Scottish arms of Seton in reversed tinctures, while the chief alludes to the barry wavy field of the diocesan arms. The three torteaux in the crest are from St. Elizabeth's (and the bishop's) paternal arms, "Argent three torteaux a chief Gules."

The similarly named Seton Hill University, in Greensburg, Pennsylvania, also has rather fine arms based on those of Seton. Seton Hill was founded as a girl's school in 1885 by the Sisters of Charity, the order founded by St. Elizabeth Seton, and gradually evolved into a women's college and eventually into a small university with both male and female students. The black chief with three gold crosses "pattées-arrondies" looks to me like a reference to the arms of the Diocese of Pittsburgh, "Sable, a fess chequy argent and azure, in chief two crosses-pattées-arrondies or, over all in pale a sword, hilt in base, of the last," although that diocese has not included Greensburg since 1951. The college itself explains the crosses as an allusion to the order, but the Sisters of Charity of St. Elizabeth are more usually represented by a pelican in her piety.

LeMoyne College, Syracuse, NY I am trying to find an image of the "seal" to post.

(excerpted from Le Moyne's 50-year history book "Against the Sky")

Five arrowheads are displayed to represent the Hodenosaunee, the People of the Long House, whose central fireplace is located near where Syracuse now stands. Here Father Simon Le Moyne labored and earned from these people the title "Ondessonk" (Chief). The arrowheads are reversed to commemorate the reputation of Father Le Moyne as a peacemaker among the People of the Long House and the Great Peace established by these people through the confederacy. A cross forms a background for these instruments of warfare, since this apostle was ever willing to sacrifice his life for his Master. The circular object in the first quarter is known in heraldry as a fountain, representing the salt springs discovered by Father Le Moyne, and symbolizing the saving waters of Baptism which he brought to the Indians. The second quarter displays a fleur-de-lys for Beauvais, in the ancient province of Ile-de-France, to honor the birthplace of the titular of the college. The insignia of the Society of Jesus is the central motif of the chief (upper compartment) and is inscribed on a book to designate that Le Moyne is a Jesuit institution of learning.

The College colors, green and gold, are the tinctures of the seal. The cross and upper bar on the shield are green and the four fields formed by the cross on the shield are gold. The device of the fleur-de-lys is green, the fountain green and white, the arrowheads gold, and the book and scroll white with green lettering for the motto. "TOTUS IN DOMINO JESU" [Everything in the Lord Jesus], is a phrase which Simon Le Moyne customarily used at the end of his letters to his superiors.
Ed Hillenbrand

JMcMillan wrote:The black chief with three gold crosses "pattées-arrondies" looks to me like a reference to the arms of the Diocese of Pittsburgh, "Sable, a fess chequy argent and azure, in chief two crosses-pattées-arrondies or, over all in pale a sword, hilt in base, of the last," although that diocese has not included Greensburg since 1951.

Despite the college's own misleading explanation I'm sure when the coat of arms was created it was prior to the split of the diocese and Greensburg was in the Diocese of Pittsburgh. In addition, the same crosses appear as charges in the arms of the Diocese of Greensburg as an allusion to its mother See. Interestingly, in neither the Pittsburgh nor the Greensburg arms are there three crosses. In both diocesan coats of arms there are only two. Nevertheless, the symbolism works either way.
Top

Thank you Chris Green, you always are able to help out.
Ed Hillenbrand

The Catholic University of America.
Top

My contribution to Indiana University, my emblazonment of Ade Bethune's 1961 design. 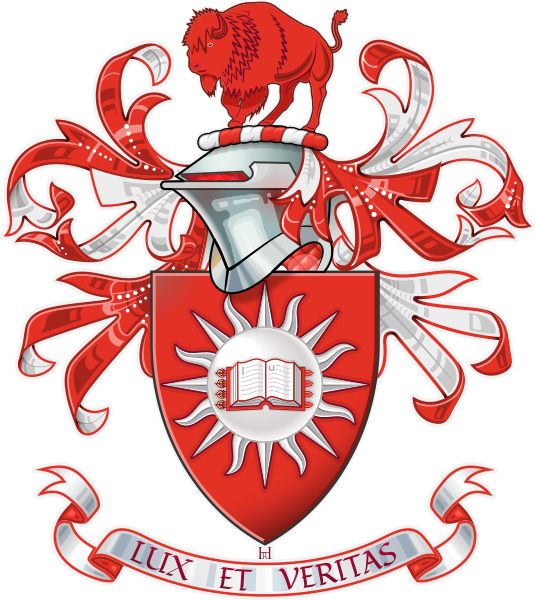