Today, some English heraldry with an American connection.

This is a specimen of English "bucket shop" merchandise from the 1860s : 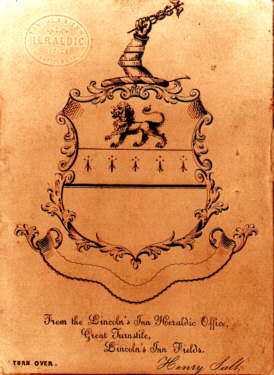 What is the American connection? Well, these arms were granted to George Rome, of Newport, in the Rhode Island colony, by the College of Arms on 21 July 1772 -- 246 years ago today.

The arms are a slightly differenced version of existing Rome arms, which have been known since the late 13th century. Some have a red fess, others a black one. George's fess was changed to pean "in view of 'the Distance of his residence from his Mother-Country and a variety of incidents and frequent immigration from different parts of the British dominions which have occurred to his father, grandfather and other of his ancestors." *

For some reason, the British heraldry reference books (Edmondson, Berry, Robson, Burke) list these arms under 'Roome' rather than 'Rome'. An American publication, Crozier's General Armory (1904), lists the arms, with a different crest, under 'Roome, Rhode Island', names one John Roome of Newport, and states 'Granted July 21, 1772'. This raises the question of whether John Roome was descended from George Rome (who returned to England after the Declaration of Independence), or whether this a case of "borrowed plumes".
------------------------------
* D.C.L.M. Galles, 'Heralds for the Republic' in Alta Studia Heraldica Vol 3 (2010)
Regards
Arthur Radburn
IAAH Vice-President : Heraldic Education
Top
Post Reply
1 post • Page 1 of 1