My eye was caught by the charming bow tie and I wonder whether this has some significance or is merely decorative?
As an aside, thank you for researching out these civil arms. I much appreciate your efforts.
Top

My eye was caught by the charming bow tie and I wonder whether this has some significance or is merely decorative?

It took me a moment to work out what you meant. I think the decorative bow merely ties together the two sprigs around Tarragona's arms.
Chris Green
IAAH President

The City of Tarragona's arms are beautiful!

As for the logo of Escaldes Engordanay (sp?), judging it only on it's own merits as a logo and not as "arms" I rather like it!

First, apologies to the Spanish speakers among you who will have spotted the accent over the a instead of the n in España.

Today (Wednesday) the Vuelta starts from Benicassim, a town through which it passed last year and whose name I correctly guessed was Arabic.

According to WikI the name is derived from the Banu Qasim tribe, a segment of the Kutama Berbers that settled the area during the 8th century Moorish conquest of Spain.

The arms feature not only the almost ubiquitous Aragonese pallets but also the Moorish star and crescent. As to the "Azure a Bend between two Eagles displayed Argent", I can only guess (as I did last year) that they were the arms of a noble who once held the land here.

The route passes through Castellón de la Plana, where a stage started last year and whose arms are found here:

and then Oropesa del Mar, whose arms consist of the all too frequent "castle on a rock":

The finishing line is in the coastal village of Alcossebre, which forms part of Alcala de Xivert whose arms feature ... wait for it ... a castle (though this time on flat ground). The castle is depicted ""de su color" (proper), though I doubt that the local castle is brown.

Thursday's stage sees the riders set off from Vila-Real, a royal city as its name implies, founded in 1264 by King James I of Aragon (Jaime el Conquistador). The arms are of course those of Aragon, but on the lozenge that was commonly used in Aragon to distinguish that the arms were those of a city, not a person. This Vila-Real must not be confused with any of the other communities of the same name in Spain, nor with that in Portugal, whose arms are: The finishing line is at Sagunto (Sagunt in Catalan), whose arms, adopted as recently as 1998, are those of Vila-Real but with a variety of additions encircling the lozenge. How heraldic these are, or simply add-ons agreed by the town council I cannot say. The M and L clearly have some significance, but I cannot (yet) discover what.

The city was originally named Arse (really!) by the Phoenicians, Saguntum by the Romans and Morvedre by the Moors. It has been besieged by, among others, Hannibal and El Cid. It was the birth place of the composer Joaquin Rodrigo (Concierto do Aranjuez).
Chris Green
IAAH President

Friday's stage is from Lliria to Cuenca.

Lliria relies on a castle (how many communities in Spain have castles?!), but this one is, unusually, surrounded by a ring wall:

The description of the flowers: a lily (lirio) with three flowers proper (which incidentally are canting) seems not to match the emblazonment. To me that implies three flowers on one stem, not three lilies as depicted. 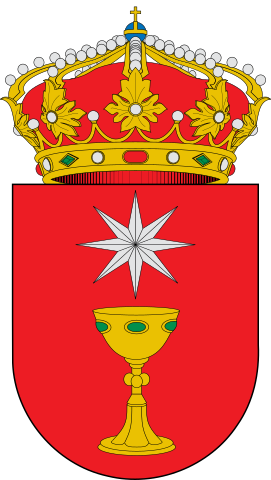 The finish is in the hills north of Alicante whose arms are replete with no less than four letters of the alphabet: A L L A, which apparently stand for Akra Leuka (the Greek name) Lucentum (the Roman name) and Alicante. Note that the rock has the image of a human face which is because Monte Benecantil on which Alicante castle (el castillo de Santa Bárbara) stands is in the shape of a human face when seen from the sea.

I have not (yet) discovered the reason for the Order of the Golden Fleece.
Chris Green
IAAH President

Chris Green wrote:The finish is in the hills north of Alicante ,,, I have not (yet) discovered the reason for the Order of the Golden Fleece.

All I've been able to find looking at a number of Spanish-language sites, including that of the city itself, is that Charles V decided in 1528 that the collar of the Order of the Golden Fleece would be incorporated into the arms in recognition of Alicante's support for the crown.
Joseph McMillan
Alexandra, Virginia, USA
Top

Orihuela should be remembered here for its flag: 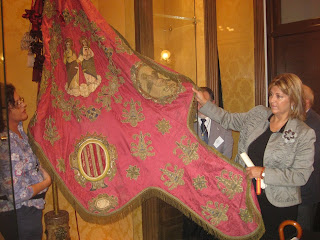 You can read about the flag (and the coat of arms) here - if your Spanish is up to the task:

The race passes through many tourist areas, including Alicante (whose arms we have already seen), Benidorm and Calp whose arms were both discussed in 2016 http://amateurheralds.com/forum/viewtopic.php?f=12&t=1160. 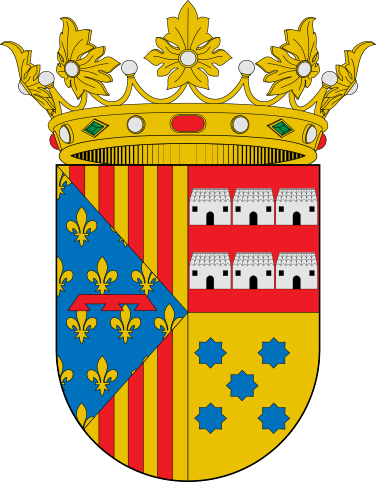 Why the arms of the Counts of Anjou? I can't find any background (yet). My guess is that it refers to Charles of Anjou, King of Sicily (he of the Sicilian Vespers) (1226-1285)

The area was reconquered from the Moors in 1244, so Charles of Anjou may have had a hand in that.

The huts and the stars are a mystery - perhaps the arms of a former landowner?
Chris Green
IAAH President

I am guessing here, but, as 'poble' seems to have the meanings 'people', 'population', 'village', it is possible that the two rows of houses represents the town while the stars in saltire may well be those of a former lord.