Arms of Noble Families of Sweden

Arms of Noble Families of Sweden

The Noblity of Sweden now only exists as a private corporation. Heraldicly the Nobility still has some particular traits. The various classes Counts, Barons and Noblemen has Heraldic symbols not to be used by commoners. Counts (Grevar in Swedish) are distinguished by placing three helmets crowned by Countly Crowns and are allowed Supporters. The are some exeptions from this the Counts Lewenhaupt for instance uses 8 helmets but no Supporters.

Plate with the Arms of the Counts Lewenhaupt from the Riddarhuset, where Plates with the Armorial Bearings of all Swedish Noble Families hangs.

A more "ordinary" countly Shield, the Arms of Counts Strömfeldt. 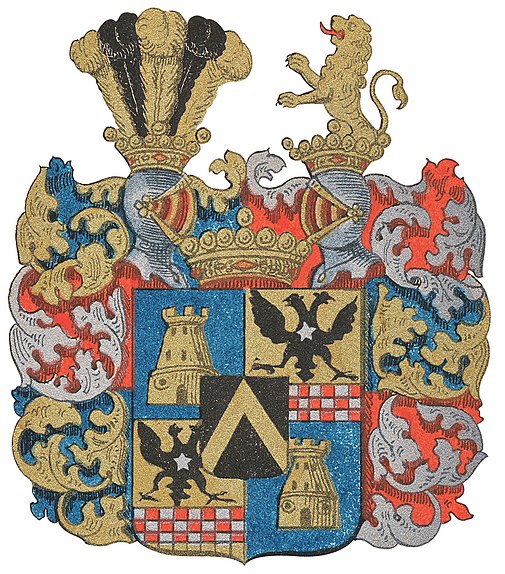 Noblemen (Adliga in Swedish) uses a open Helmet Crowned with a noble Crown. No Supporters. 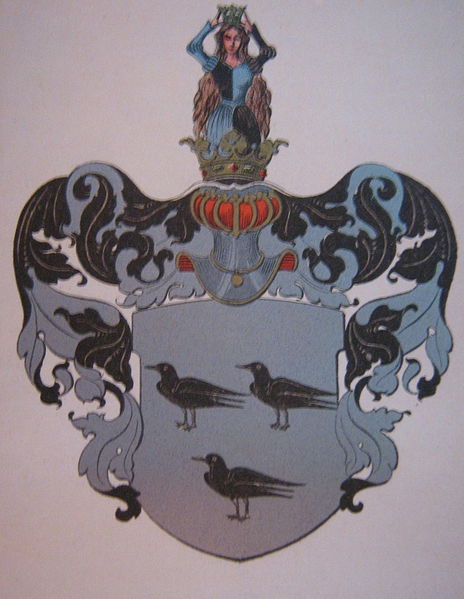 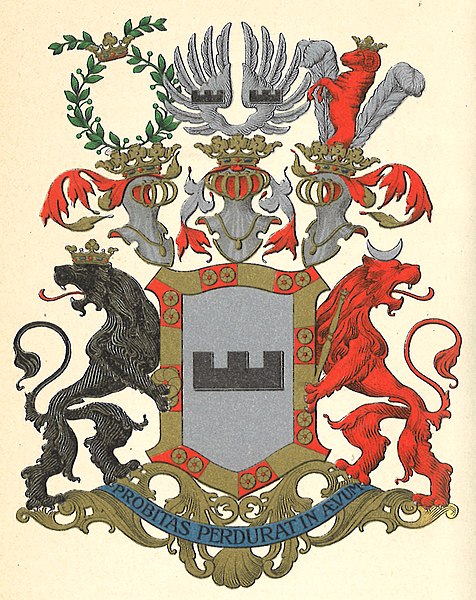 The "golden age" of Swedish heraldry was largely the period 1620-1720, when Swedish armies were in almost constant action against Russians, Poles, Danes and an assortment of German states, and the old noble families were swamped with new creations, many of them foreigners (including many Scots) who had reached the upper reaches of the Swedish army. Thus the majority of Swedish coats of arms are what one might describe as "post-classical". There are many arms containing firearms, grenades and the like, and the depictions are often "gothic" as we see in the examples given by Marcus.

There were and are no non-royal Swedish Princes (Prinsar) or Dukes (Hertigar), nor were there ever any Marquises or Viscounts. However, as the Wiki article explains there is one living Duke (d'Otrante) with Swedish nationality, but the Dukedom is Napoleonic not Swedish. Similarly there is one non-noble Prince and a couple of Marquises with Swedish nationality, but again the nobility is non-Swedish.

Sweden followed continental practice in that Knights (Riddare) and Esquires (Svenner) were considered noble, unlike England and Scotland.

It was not unusual for men to change their surname on ennoblement, or for old noble families to take a surname instead of using the traditional method of using their father's name (e.g. Sven Persson's son might be Anders Svensson). These names often reflected their arms. Thus the oldest Swedish noble family became known as Natt och Dag (Night and Day) because their arms were: Per Fess Or and Azure). Over 50 people in Sweden still bear this unusual surname.

One of the Scottish Families that sent branches to Sweden was the Hamiltons. One branch becam the Barons Hamilton af Hageby.

Her one can see a feature common among the higher nobility (Counts and Barons), when raised to higher rank the original Coat of Arms of the Family (created upon becoming a Nobleman in most instances) was place on a enschuteon.

The many Wars of the period 1620-1720 created many new Nobility one was the Privateer Lars Gathe, enobled in 1715 taking the surname Gathenhielm. His Arms tells of the Naval activities of the Grantee which also was a Commander in the Swedish Navy, the Crest thusly shows two Swedish Naval Ensigns. 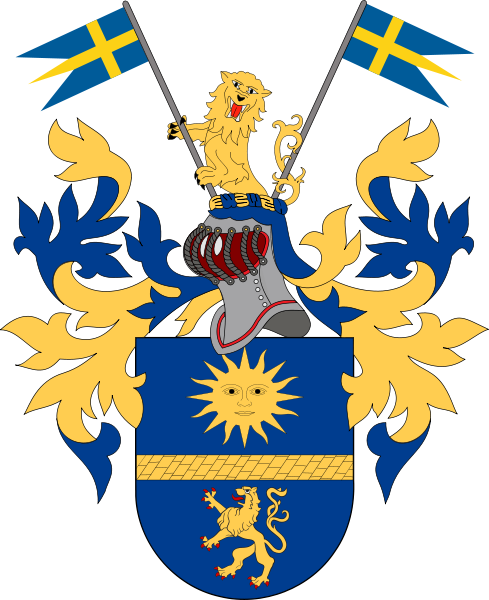 One other naval Hero was the Admiral (from 1715) Gustaf von Psilander. Famous for the Battle of Orford Ness 24 July 1704, when his ship HMS Öland refused to strike Flag or Sail for an British Force of Eight Ships of the Line and a Frigate. von Psilander in doing this was only following the biding of the Swedish King who declared that no Swedish Ship should stirke its Falg or Sail for a Foreign Ship. The British was infuriated by what they saw as a great insult and attacked. HMS Öland defended herself for four hours but then was forced to give up, but von Psilander didnät surrender instead he hoisted distress Flag and was taken prisioner. He was released and returned to Sweden already in 1705 to prusue an distinguished career raising to the rank of Baron and serving as Governor of Gotland of of the Län of Kalmar.

The Crest of von Psilander's Arms show eight British Red Ensigns of the Eigth Ships of the Line that faced the lonely HMS Öland symbolised by the one Swedish Naval Ensign.

The Epitaph of Baron Gustaf von Psilander in the Kalmar Cathedral. He died in 1738.
Top 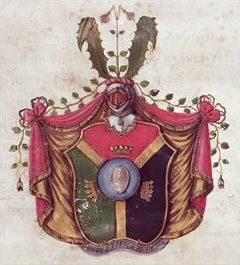 The three fields denote the three Kingdoms of Nature as indicated by von Linné - The Animal, the Mineral and the Vegetabile. In the Middle an Egg denoting the Begining of Nature.
Top Armorial bearings of the Explorer Adolf Erik Nordenskiöld raised to the rank of Baron following the successful Vega Expedition 1878-1880, that navigated the North East Passage between the Atlantic and Pacific Oceans (Sailing around the northern coast of Russia).

The Commander of the Ship Vega which made that memorable journey, Lieutenant Louis Palander was enobled taking the name Palander af Vega. His Arms rather unimaginative but of cause understandable showed the Ship Vega and the Motto Framåt! (= Forward!). There is a colour version of the Nordenskiöld arms here: Armorial bearings of the Noble linage No 2342 Wijk. Olof Wijk the younger (1833-1901) a Businessman and Politician. Speaker in the second chamber of the Swedish Parliament 1880-90. Ennobled in 1890 as the second last person in Sweden. The Chairman's gavel denote his time as Speaker. The Crest shows the Arms of the City of Göteborg (but with the Lion turned the right way) where he was born and symbols of his Business activities. The Noble branch of the Family died with Olof's son Hjalmar in 1965.
Top

It is interesting that neither Törnqvist/Adelcrantz nor Wijk was too proud to recall their professional origins, though in Herr Wijk's case his anchor and caduceus might mislead one to think that he was active in shipping or the navy and heraldry or communications, whereas he was in fact owner of Wijk & Co grosshandlare (wholesale merchant) and on the boards of many companies including Götaverken (who built ships). Thus the caduceus was used in its secondary meaning as a symbol of commerce and the anchor for the building rather than the operation of ships.

It should also be noted that neither Törnqvist/Adelcrantz nor Wijk was raised to what we British would consider the Peerage. They were members of Riddarklassen (the order of knights). Adelcrantz's sons were however created friherre which equates to the English baron. In Sweden riddare were were classed as nobility (with tax exemptions among other privileges), whereas English knights were never considered noble (and had no tax privileges!).
Chris Green
IAAH President