As Chris Green mentioned in the thread on Swedish Noble Arms. There are some Swedes having been awared foreign Noble Titles. One of thes are the Marquis Lagergren which is a Papal creation. The Convertite Claes Lagergren (1853-1930) which in 1884 become Papal Charberlain and went on to serve the Popes Leo XIII, Pius X, Benedict XIV and Pius XI. In 1889 Pope Leo XIII created Lagergren a Marquis. 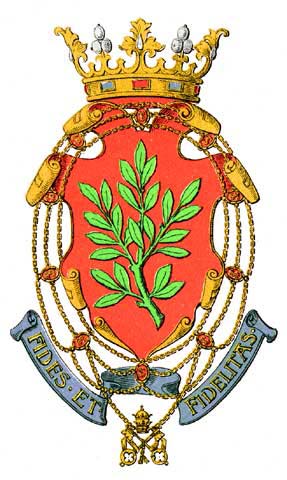 Armorial Bearings of the Marquis Lagergren. The Arms are canting the Swedish Lagergren translates as Laurel Branch.
Last edited by Marcus Karlsson on 20 Jul 2020, 11:38, edited 3 times in total.
Top

I wondered what King Oscar II thought of one of his subjects being awarded a Marquisate and a high position at the Papal Court by the Pope. According to Wiki, Claes Lagergren was one of the King's inner circle of friends, so either the King was outraged that a Lutheran should have betrayed his faith and his king, or he gave his blessing to this singular event. Perhaps Marcus can enlighten us.

For the background on Lagergren and on Papal Chamberlains:

I'am not sure what King Oscar II thought of this so the question require more reseach. But one guess the King quietly approved Lagergren's title as the later appears to kept his Swedish Citizenship. But Lagergren was not introduced at the Riddarhuset and dosen't count as belonging to the Swedish nobility. The Family however is a Member of the Association of Non-introduced Nobles (Ontroducerad Adels förening in Swedish).
Top

The Swedes may have seen this as a potentially useful contact with the Roman Catholic world.
Michael F. McCartney
Fremont, California
Top

According to the Catholic Encyclopedia, the law requiring Swedish converts to leave the kingdom was repealed in 1860, well before Lagergren's conversion (he would have been seven at the time). And if the kind needed a channel to Rome, there had been a vicar apostolic conveniently located in Stockholm since 1783. I can easily imagine that the conversion of a well-connected man would have created something of a social scandal, but would it really have such serious political implications? We're talking the 1880s, not the midst of the Thirty Years' War.

Returning to heraldry, I like the arms.
Joseph McMillan
Alexandra, Virginia, USA
Top

Post-Reformation, Roman Catholic services were prohibited in Sweden until 1784. I find elsewhere:

In 1860 it became possible to withdraw from the Church of Sweden. However, you could only withdraw if you had become a member of another religious community, a community approved by the state [in practice only another form of Christianity].

Thus Lagergren was in no way prohibited from converting to Catholicism, though it would have been highly unusual. Even today the number of Swedes who are not themselves immigrants or the children of immigrants is extremely small. There is only one Roman Catholic church in my locality (Karlstad, population 87,000) and that uses a building surplus to the requirements of the Baptists.

The Swedish royal family seems to have made considerable efforts to reduce the former animosity between the Swedish Lutherans and Roman Catholicism. In March 1898 the then Crown Prince visited Rome and was received by The Pope (Leo XIII). He was greeted on arrival at the papal apartments by, among other notables, Marquis Lagergren.
Chris Green
IAAH President