We haven't had any Norwegian heraldry on the forum for a while. Here's a topical subject : the municipality of Asker is holding a public competition to design a municipal coat of arms.

2000 entries were received, from which the judges selected the following ten finalists. Voting ends this coming Thursday, and the result is expected on Friday. 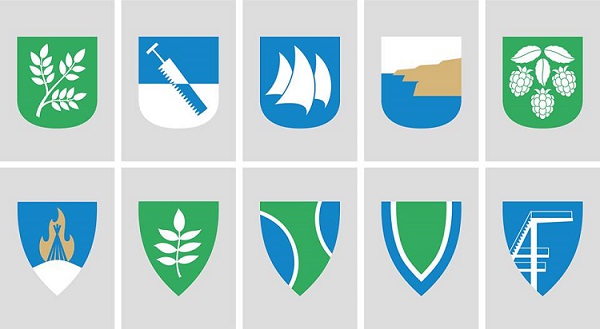 Any thoughts about these designs? Which would you vote for?
Regards
Arthur Radburn
IAAH Vice-President : Heraldic Education
Top

While the polled ash trees in the existing arms are (to me) unattractive, they seem to have historic and canting influences.
Top

Having fun with submissions, my comment above should have noted my feeling that the loss of the history is sad.
Top

Voting has closed, and the results are in. The three finalists are :

The symbolism is very simple. 'Asker' means 'ash tree', so two of the designs are canting. It is a seaside town, hence the sails. The new arms are needed because two neighbouring muncipalities are being incorporated into Asker, hence the three sails and the three leaves on the branch, to symbolise the three communes.

A jury will consider the finalists, and announce a decision on 21 June.

Curious (no particular reason, just curious) re: the names and arms (if any) of the other two former entities.
Michael F. McCartney
Fremont, California
Top

Michael F. McCartney wrote:Curious (no particular reason, just curious) re: the names and arms (if any) of the other two former entities. These are the current arms of Asker, granted in 1975, depicting trees that are typical of the area. These are the arms of Hurum, granted in 1979, alluding to the town being situated on a peninsula between two fjords. These are the arms of Royken, granted in 1967, the flame being a cant on the first syllable of the name, which means "smoke".

All conforming to the Norwegian rule that municipal arms should have only one charge and two tinctures.
Regards
Arthur Radburn
IAAH Vice-President : Heraldic Education
Top

Well, the decision has been announced. The 'Three Sails' design has been chosen as the arms of the new municipality.
Regards
Arthur Radburn
IAAH Vice-President : Heraldic Education
Top

Could have been worse.

I'm not sure I could draft a blazon that would guarantee that the emblazonment resembled the picture.
Chris Green
IAAH President