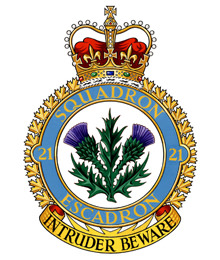 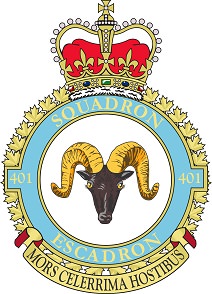 401 Tactical Fighter Squadron : "the mountain sheep, indigenous to many parts of Canada, is known for its great stamina and fighting power." 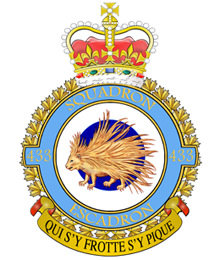 433 Tactical Fighter Squadron : the porcupine represents Porcupine District, Ontario. The motto translates as "Who opposes it gets hurt." In heraldic terms, the blue disc in the badge is, of course, a hurt.

What is the seasonal significance? Well, these three squadrons have been assigned to a special mission. As the RCAF explains :

"The Canadian NORAD Region (CANR) marks its 62nd year of tracking Santa Claus's yuletide journey from the North Pole with the naming of its escort pilots, maintainers and tracking crews for the high-profile assignment.

"The men and women of NORAD keep a watchful eye over the airspace of Canada and the United States 24 hours a day, and we are very proud to do so. Every year, we take on an additional, but very special responsibility – employing the same technology and systems we use to defend our two countries to track Santa's passage and escort him on his journey through North America.

"It's truly an honour to support Santa as he delivers joy and goodwill around the world."
Regards
Arthur Radburn
IAAH Vice-President : Heraldic Education
Top

The heraldry is execrable, but here's an old photo of Santa's NORAD escort once over U.S. territory.

Actually, the heraldry isn't really as bad as I jokingly suggested. The emblem on the F=15Es' tails is the coat of arms of the USAF's Air Combat Command, formerly that of one of ACC's predecessors, the Tactical Air Command..

Reinterpreted by a good heraldic artist they could indeed be pretty good, though I have my reservations about the bordure.
Chris Green
IAAH President

Chris Green wrote:Reinterpreted by a good heraldic artist they could indeed be pretty good, though I have my reservations about the bordure.

The official blazon appears to be : Per fess nebuly abased Azure and Gules, the nebuly fimbriated Argent the Azure within a fimbriation bordure of the third, all surmounted by a sword Argent grip Gules with markings Sable in pale hilt and pommel to chief, the sword between a pair of wings Or tips upward.
Regards
Arthur Radburn
IAAH Vice-President : Heraldic Education
Top

Per fess nebuly abased Azure and Gules, the nebuly fimbriated Argent the Azure within a fimbriation bordure of the third, all surmounted by a sword Argent grip Gules with markings Sable in pale hilt and pommel to chief, the sword between a pair of wings Or tips upward.

If they dumped the fimbriation the rest is fine.
Chris Green
IAAH President

I suspect this is a newish blazon, at least with respect to the description of fimbriation surrounding the upper part of the shield. The Air Force Historical Research Agency, which oversees USAF heraldry, got it into its head some years back that the edging of the shield to separate the omnipresent azure from the blue background of Air Force unit colors (and to bind the edges of cloth uniform patches) has to be blazoned. The usual formula is "a diminished bordure." I once had a conversation about this with a guy who works on heraldry for AFHRA and he just shrugged.
Joseph McMillan
Alexandra, Virginia, USA
Top

Practical considerations. Military insignia like this is used by dozens of subordinate units, displayed on hundreds of aircraft and installations, and worn on the uniforms of thousands of airmen; and the decals, cloth patches, and enameled metal badges are manufactured by private companies that bid on agency contracts. Every one of these items must be precisely identical in appearence to every other one.
Artistic license is limited to the original design which is then the model which must be exactly reproduced. Under those conditions, it's not at all surprisingly that the official blazons are more than a little OCD!
Michael F. McCartney
Fremont, California
Top
Post Reply
11 posts