Came across this line of partition on the Canadian Heraldic Authority's online register : 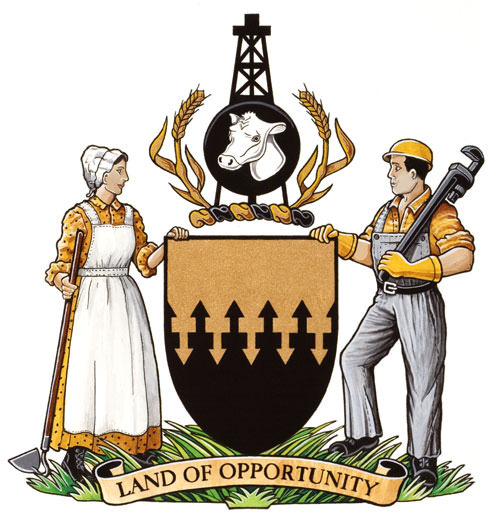 These are the arms of the Rural Municipality of Reciprocity No 32, in Saskatchewan, granted in 2006.

Arms -- Per fess barbelé Or and Sable.

Crest -- In front of an oil derrick Sable between two ears of wheat Or a pellet charged with a cow’s head Argent.

Symbolism -- The arrowhead division line, used here for the first time in Canadian heraldry, refers to the idea of free trade implicit in the Municipality’s name. The colours refer to the main industries of the area: yellow for agriculture, black for oil. The derrick and wheat repeat the oil and farming symbolism, and the cow’s head refers to another aspect of the agricultural industry. The pioneer farm woman and the oil worker standing on prairie grass honour the women and men who have built the Municipality over the years.
Regards
Arthur Radburn
IAAH Vice-President : Heraldic Education
Top

Interesting partition line - though without the visual image, "Barbelé" would in the immortal words of Yul Brenner, remain "a puzzlement"

Barbely invokes images of the barbel, a fish, but Barby might conjure up images of plastic dolls.
Top

Unless there is going to be some international database of these new terms it is going to be very confusing to future (and present come to think of it) generations; the Canadian heralds might know what it is and what it's called, but the rest of us remain puzzled.
Martin Goldstraw
Cheshire Heraldry
http://cheshire-heraldry.org.uk
Top

"Barbelé" means "barbed" as in a hook. I am not sure what sort of barbs the arms are meant to represent, but they clearly are not hook barbs.

This term can certainly cause confusion. While a Google search for "barbelé" produces a link to these arms, it also produces links to heraldic dictionaries which use the term in the context of the barbs of a rose (as in "a rose barbed and seeded").
Regards
Arthur Radburn
IAAH Vice-President : Heraldic Education
Top

The arrowhead division line, used here for the first time in Canadian heraldry, refers to the idea of free trade implicit in the Municipality’s name.

Here is an image of two free traders I found on the web.

Tongue in cheek credit to the artist Matthew Ryan and the free trader Chris Green.
You do not have the required permissions to view the files attached to this post.
Martin Goldstraw
Cheshire Heraldry
http://cheshire-heraldry.org.uk
Top

Perhaps the arrowheads pointing in two directions are supposed to suggest two-way trade.

Not sure how I came to be described as a "free trader" Martin.

PS: How do you upload the picture? I have forgotten how.
Chris Green
IAAH President