Continuing our world tour of the heraldry of island states, we reach the Caribbean.

To begin with, the Leeward Islands. This was an administrative grouping (1871-1956) of six British colonies, namely Antigua, Dominica, Montserrat, Nevis, St Christopher (a.k.a. 'St Kitts') and the Virgin Islands. There was a single governor for the whole group, and an administrator on each island.

Each island had a public seal. Here, for example, is the seal of the Virgin Islands. It's a typical 19th-century design (the so-called 'Newfoundland pattern seal') displaying the royal arms at the top, and a design representing the colony in the lower half : In 1869, the British government had introduced a system of flag badges for use at sea. Each territory in the British Empire had to have a badge, which its governor would display in the centre of the Union Jack, and its government ships would display on the Blue Ensign. In many cases, the design from the public seal was adopted as the badge, but some territories introduced new designs. This was the badge of the Leeward Islands. The pineapple is believed to represent the governor at the time Sir Benjamin Pine : Very few colonies had coats of arms in those days. In 1905, the College of Arms persuaded the UK government to encourage colonies to apply for grants of arms. The Leeward Islands obtained theirs in 1909. It was not the best design ever produced by the College : The six small shields contain the devices from the seals of the islands. From dexter chief to sinister base : Antigua, Dominica, St Kitts and Nevis (which had been combined under a single administrator), Montserrat, and the Virgin Islands. The pineapple from the flag badge became the crest.

After Dominica was removed from the Leeward Islands in 1940. the arms were amended by omitting its shield : The arms of St Kitts & Nevis were less successful. The dexter chief represents St Kitts (the figure being Christopher Columbus), the sinister chief Nevis, and the base Anguilla : New arms were granted when St Kitts-Nevis-Anguilla was granted self-government as an 'associated state' in 1967. The motto was originally 'Unity in Trinity', but it was changed to 'Country above Self' in 1983 : (Anguilla had seceded from the associated state, so there was no longer a 'trinity"). The current arms of Anguilla look suspiciously "home grown", but have presumably been given the blessing of the College of Arms since they are used in the Territory's and Governor's flags:

The dolphins are apparently supposed to be orange/tenné as depicted, but the base is meant to be azure, not bleu celeste. The decision to use the light blue will have been that the base would be invisible when the arms are displayed on the Territory's flag: The explanation for the design is apparently:

Anguilla's coat of arms contains three dolphins jumping out of the sea. Their orange color symbolizes endurance, unity and strength, and the circular motion is for continuity. The white background of the coat of arms represents peace and tranquility, and the blue base represents the surrounding sea, as well as faith, youth and hope.

The Anguillan arms are derived from the flag which the islanders raised after seceding from St Kitts-Nevis in 1967 :

The arms were granted in 1990. There's a discussion about the flag and the arms, including a first-hand account by the designer, on this page.
Regards
Arthur Radburn
IAAH Vice-President : Heraldic Education
Top

The US Virgin Islands have no arms but a "seal": 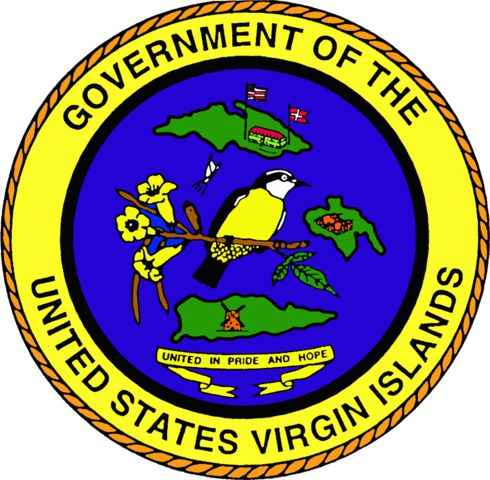 I put the quotation marks round seal, because to me the design is inappropriate for use as a metal stamp on sealing wax. It is just too fussy.
Chris Green
IAAH President

The Commonwealth of Dominica (not to be confused with the Dominican Republic - the eastern half of Hispaniola) has arms granted in 1961:

The Dominican Republic's arms are clearly from another heraldic tradition: 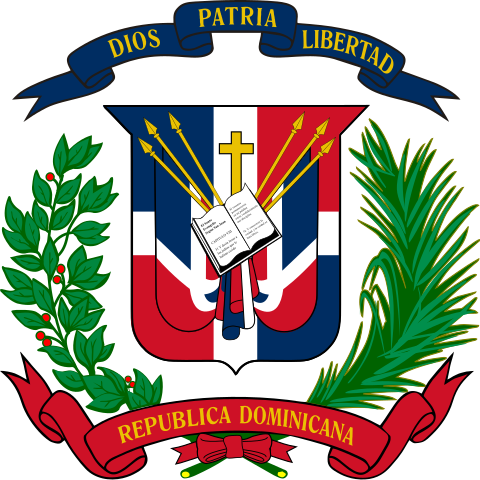 Sadly Caribbean1st.com has a page for the Dominica coat of arms that shows a picture of the Commonwealth of Dominica's arms, but then goes on to describe the arms of the Republic.

I can understand the confusion (it must be very frustrating at international meetings and the UN), but one might have hoped that a website dedicated to the Caribbean might have got it right.
Chris Green
IAAH President

Saint Lucia is one of several Caribbean island states that is named after a saint. It has had three coats of arms in the space of 78 years.

The first arms, granted by King George Vi in 1939, consisted only of a shield, with charges referring to the island's history of both French and British rule : The arms were altered when Saint Lucia became a self-governing "associated state" in 1967. The tinctures were reversed, a three-legged stool was added to represent the African heritage, a crest was added, two parrots were added as supporters, and the motto was changed : The third and current version was granted by Queen Elizabeth II when Saint Lucia became an independent realm in 1979. Once again, a change of tinctures, and the addition of ferns to the crest and supporters : Chris Green wrote:I put the quotation marks round seal, because to me the design is inappropriate for use as a metal stamp on sealing wax. It is just too fussy.

Not defending the design at all, but when seals mattered, fussy was not only appropriate but essential. Take a look at the intricate detail on royal seals of the 17th-18th centuries. It was an intentional measure to make counterfeiting more difficult, just like all the fussy detail on modern currency.

(Also, by the time the Virgin Islands were transferred to the U.S. from Denmark, U.S. official seals were never impressed into hot wax but onto an adhesive paper wafer or directly into the paper, so the technical challenges of getting a clean impression on wax no longer pertained.)
Joseph McMillan
Alexandra, Virginia, USA
Top

Puerto Rico has what purports to be the oldest public coat of arms in the Americas, granted in 1511. The Lamb of God allude to the patron saint of the city of San Juan, St. John the Baptist, as does the motto (the words of John the Baptist's father, Zachariah, Luke 1:63). The bordure is compony of the heraldic emblems of the various lands under the Spanish crown, including the by-then-nominal claim to the Kingdom of Jerusalem. The crowned F and Y and the yoke and arrows flanking the shield are the cyphers and badges of King Ferdinand and Queen Isabel (Ysabel) respectively, in whose names the island was claimed for Spain.

Note, in contrast to the U.S. Virgin Islands, that Puerto Rico knows how to turn a good coat of arms into a good seal--and without simply putting the shield of the arms on a circular background.

Arthur Radburn wrote:The third and current version was granted by Queen Elizabeth II when Saint Lucia became an independent realm in 1979. Once again, a change of tinctures, and the addition of ferns to the crest and supporters

Ferns? I would have guessed these were sugar cane leaves, at least based on the emblazonment.
Joseph McMillan
Alexandra, Virginia, USA
Top

In the Aeneid Vergil has the Greek Navy hide at Tenedos (an island off Asia Minor) in order to encourage the Trojans in the belief that the Greeks have given up the siege of Troy and thus to take the wooden horse into the city. He describes the harbour at Tenedos as "Statio male fida carinis" (an untrustworthy harbour for ships). The capital of St Lucia, Castries, boasts an excellent natural harbour, so some bright spark with an expensive classical education added "haud" (not at all) to Vergil's words about Tenedos, to give a motto that in English would literally be A not at all untrustworthy harbour for ships.
Chris Green
IAAH President