The Heraldry of Belgium, The Netherlands and Luxembourg
Post Reply
4 posts • Page 1 of 1

The arms of the local authority of Fleverwaard in the Netherlands, granted in 1988 : 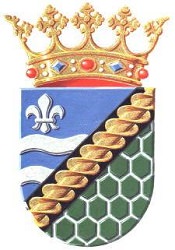 The screw thread is an uncommon charge. Has anyone here seen one in any other coat of arms?
Regards
Arthur Radburn
IAAH Vice-President : Heraldic Education
Top

The screw is of course an Archimedes Screw as used to raise water (vital in the former Zuiderzee area).

I surmise that the azure half represents the sea, and the vert the recovered land. The flag of Flevoland, which approximates to the former Zuiderzee, has a similar blue + f-de-l and green half:

though it arms treat the watery link somewhat differently:

The reason for the f-de-l is at first sight obscure, until one learns that they are canting for Cornelis Lely, who was responsible for the draining of Zuiderzee.

It is hard to think of another engineer or government minister (Lely was both) who has been responsible for such a sea-change in the physical geography of their native land.
Chris Green
IAAH President

Chris Green wrote:The screw is of course an Archimedes Screw as used to raise water (vital in the former Zuiderzee area).

I surmise that the azure half represents the sea, and the vert the recovered land.

Correct. The blazon, as given on the Heraldry of the World website, omits the name 'Archimedes', but the explanation of the design is (my translation) : "The thread on the bend is a screw which is used to drain the water. The lily is the arms of Engineer Lely, the founder of the Ijsselmeer polders. The waves represent the outside water, the hexagons the dykes."
Regards
Arthur Radburn
IAAH Vice-President : Heraldic Education
Top

The fleur de lis is a very common charge in the heraldry of the province of Flevoland. You can see it in the arms of Lelystad ( yes he even got a town named after him), Almere, Dronten, Noordoostpolder and Zeewolde. The only exception is Urk but that is because it was an island that was incorporated in the new lands that were forrmed. Because it was an island it was a community and had its own arms long before Lely got started.
Ton de Witte
IAAH secretary
Top
Post Reply
4 posts • Page 1 of 1