As if by magic (in fact by team coaches) the riders have been transferred eastwards through the Pyrenees to Limoux, home of Blanquette de Limoux, not a girl but a sparkling wine that dates back to 1531 and the abbey of Saint Hilaire (a century before méthode champenoise was invented by the Englishman Christopher Merret). Limoux's arms are a depiction of Saint Martin of Tours sharing his cloak with a beggar. Why St Martin I cannot say.

Interesting thought, but arbalests/crossbows fired bolts/quarrels not arrows. They were shorter and did not have feathered fletchings.

But several examples in the chart you posted do have vanes that can appear to the untutored eye to be feathered fletching.

I'd suggest that the answer may depend on how old the arms are. It's possible that someone hundreds of years ago might have drawn a coat of arms with with arbalest bolts--say, the military bolts that are the first in your chart--and someone blazoning it much later didn't realize that they were supposed to be anything but ordinary arrows. The later blazon would then drive subsequent emblazonments.
Joseph McMillan
Alexandra, Virginia, USA
Top

Chris Green wrote:Limoux's arms are a depiction of Saint Martin of Tours sharing his cloak with a beggar. Why St Martin I cannot say.

The principal parish church of the town is dedicated to St. Martin.

The principal parish church of the town is dedicated to St. Martin.

I suspected as much. But breakfast called.
Chris Green
IAAH President

Monday is a rest day for the riders.
Chris Green
IAAH President

Today, Tuesday, the race starts and finishes in Nîmes, which is just as well for me as I have injured my left hand and typing is a pain.

I covered the arms of Nîmes as the starting point for the 2017 Vuelta a España. It arms are both enigmatic and break the tincture "rule".

"Col Nem" is short for "Colonia Nemausus", the Roman name for the town. Nemausus was apparently a local Celtic deity.

"On a coin minted at Nimes to celebrate [the defeat of Antony and Cleopatra at Actium in 31 BC], a crocodile chained to a palm tree crowned with laurels symbolizes vanquished Egypt. The inscription, “Col Nem”, colony of Nimes, suggests that the victorious legionnaires were rewarded with lands in the area of Nimes."
Skipping a bit: "Over the centuries, the Nimois became attached to these coins, which were found everywhere. In 1535, they obtained permission from King Francis I to adopt the palm and crocodile as the arms of the city."

I shouldn't complain, since the riders in the Tour are having a gruelling time in the heat, but here goes anyway. Breaking a bone in my left hand and the resultant plaster cast up to beyond the wrist (entirely due to my own stupidity by the way) has made all sorts of things impossible, difficult, or just plain uncomfortable. Gripe over, back to the Tour de France.

Today the race starts from one of France's most spectacular landmarks: Pont du Gard.

The aqueduct was part of a 50km/30 mile system that brought water to Nemausus (Nîmes). It has a gradient of only 1 in 18,241 (!) but just enough to keep the water moving in the right direction.

The arms of the Commune Vers-Pont-du-Gard seem to have nothing to do with the aqueduct, unless the pale lozengy or and gules perhaps refers to the mortar-free stone-work.

The route proceeds North-East through Rochefort-du-Gard whose arms are very similar to Vers-Pont-du-Gard (so perhaps the stone-work idea was rubbish!). 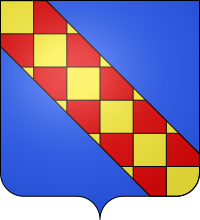 Pedalling on, the riders pass Saint-Romain-en-Viennois whose arms, featuring an heraldic dolphin, were granted only in 2017 (though they may have been in use unofficially long before that). Why a dolphin? As far as I can tell, the town has no link with Dauphiné or the Dauphin of France. Nor does Saint Romain, who came from the Jura in Switzerland, have anything to do with dolphins. Quite wrong. The "Viennois" in the town's name should have been a clue. The Dauphiné is also called Dauphiné Viennois. So the heraldic dolphin in the arms is indeed to signify Saint Romain's inclusion in Dauphiné.

Immediately before turning North for the last push to the finish, the riders traverse the village of Valserres whose population is only around 200 and perhaps therefore may be forgiven for having an advertisement for a coat of arms.

The blazon says that the charge is "au naturel" (proper) thus circumventing the tincture "rule".

The finish is at Gap (not the clothing store), whose arms feature not a castle but a "portail de ville" (city gate), or is it a "château donjonné de quatre tourelles"? Two sources, two blazons.

Today (Thursday) the Tour starts from Embrun (which is most definitely in Dauphiné!). The arms are very simple: Azure a Cross Argent, which seems straightforward. But Both historically and in the 20th century the arms were Gules a Cross Argent. When they were changed and why I have yet to discover. That the arms have supporters is unusual for French civic arms and may also be a relatively recent innovation. 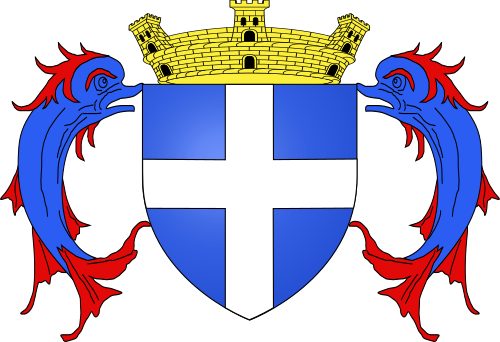 The finish is at Vallois whose arms feature what is described in the French blazon as an aiglette, which seems to be no more or less than an eagle displayed, but very small as it has to fit onto the fess.

Friday's stage starts from Saint-Jean-de-Maurienne, part of Savoy until 1859 when the area was ceded to France as part of the price for France's support for the Italian risorgimento. The hand raised in blessing in the arms represents that of St John the Baptist.

I can't omit to include the village of Bonneval-sur-Arc whose arms feature a marmot, surely one oh heraldry's rarest animal charges. 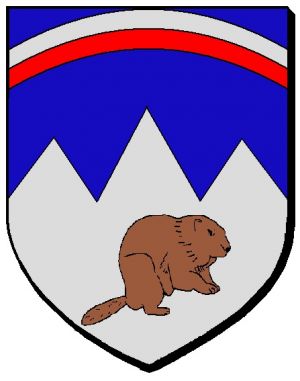 After toiling through the mountains, the riders finally come to Tignes, which forms part of the Tignes-Val-d'Isère ski resort, the highest skiable area in Europe and co-host of the 1992 Winter Olympics. The present village of Tignes is of recent construction, the original village having been submerged following the building of the Tignes Dam and lake in the 1950s.

A violent hail-storm, which covered the road ahead with a thick carpet of ice and slush and caused some minor landslides put paid to today's stage. So the riders will arrive at TIgnes in their team buses. Many will be p...ed off because they had a chance of improving their positions. Many others will be glad they avoided the final climb.
Chris Green
IAAH President