This is a picture of a French naval force supposedly on its way to attack the coast of Sussex in the 1330s. How many arms can we identify?

Note the Oriflamme flying from a lance forward of the main-mast. I suspect that this, like the shield with the two fishes beneath it, is an error. As far as I know the Oriflamme was never deployed unless the French King was present, and despite the trumpeters' trumpet banners he was not aboard. The arms with the two fish are supposedly those of the Duke of Bar, but his had a blue field. 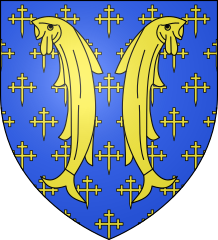 The arms on the shield to the left of "Bar" (France modern a - very narrow - bend gules) must be intended to be those of the Duke of Bourbon. But I don't think he was present either.

Which raises another issue: why France Modern? The Dukes of Bourbon used these arms only from 1410 to 1488, the century following the descent on the Sussex coast. One would expect to see these:

Is this picture perhaps a 15th century one of a 14th century invasion, painted by someone with a shaky knowledge of heraldry?
Chris Green
IAAH President

Arms that should be prominent, if this is indeed intended to be one of the attacks on the Sussex coast in the 1330s, are those of Grimaldi, either Carlos or Rainier: Fusily Argent and Gules. These two admirals, whose successors were to capture Monaco, were both commanders of French invasion forces at that period. But as mercenaries they may have been considered too common to appear in this painting.

Perhaps it is a 15th-century painting. Or perhaps the event depicted was not actually the invasion in the 1330s but some later event, which has been misidentified.
Regards
Arthur Radburn
IAAH Vice-President : Heraldic Education
Top
Post Reply
3 posts • Page 1 of 1