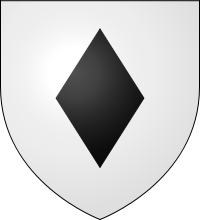 These were clearly not granted/assumed recently. At a guess they were the arms of the local lords.
Chris Green
IAAH President

Both today and tomorrow (17/18 July) the Tour passes through the Départment of the Tarn, whose CoA looks like this:

Say what you will about the use of letters on coats of arms, the herald who designed Tarn's CoA managed to do it in such a way that the blazon is not reduced to using the description "the letter T". In French the blazon is: D’or au chef-pal de gueules chargé d'une croix clêchée, vidée et pommetée de douze pièces d’or. The herald might have shortened the blazon by calling it une croix occitaine or croix de Toulouse.

Note the "T" is described in French as a chef-pal, literal translation a chief-pale. French blazon also uses chef-barre, chef-bande and chef-chevron. So what are the Anglo-Saxon equivalents?
Chris Green
IAAH President

Chris Green wrote:Note the "T" is described in French as a chef-pal, literal translation a chief-pale. French blazon also uses chef-barre, chef-bande and chef-chevron. So what are the Anglo-Saxon equivalents?

The Canadian Heraldry Authority called this figure "a chief-pale" in the arms of the City of Toronto : Or, a chief-pale Azure.
http://reg.gg.ca/heraldry/pub-reg/proje ... &ShowAll=1

Otherwise, I suppose it could be "a chief conjoined to a pale" or "a chief and pale conjoined".
Regards
Arthur Radburn
IAAH Vice-President : Heraldic Education
Top

I suppose it could be "a chief conjoined to a pale" or "a chief and pale conjoined".

A chief is supposed to be a third of the area of the shield, or rather less (Boutell) - which I take to mean more than a quarter. So a chief and a pale conjoined would normally be interpreted as "chunkier" than the "T" we find in the arms of Tarn.

There is no diminutive of the chief. There is similarly no single diminutive of the pale (the pallet and endorse are intended to be in twos or more) which is also supposed to be a third (or rather less). So "a chieflet and a pallet conjoined" is a definite non-starter.

I must say I like the French and Canadian chief-pale.
Chris Green
IAAH President

Today (18 July) the Tour passes through Millau (which sounds as though it ought to be in Germany), whose arms clearly demonstrate its links with Aragon. The Viscountcy of Millau passed to the Counts of Provence, to the Counts of Barcelona and in 1112 to the father of the future King of Aragon, Béranger III following his marriage to the daughter of the Viscount of Millau.

Today's finish is in Mendes, which is in the Départment of Lozère. Mende's CoA resorts to the use of the letter "M", albeit in an unusual font. 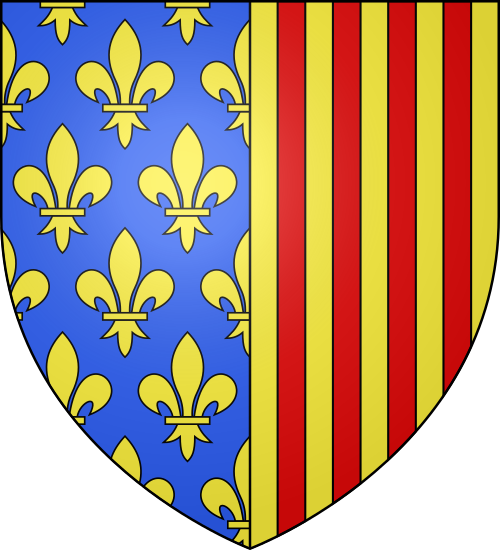 In the vicinity of Mendes in Lozère Départment is the commune of Saint-Rome-de-Dolan whose CoA includes a very unusual charge.

It looks like a heraldic version of a catherine-wheel - the fireworks version rather than the torture device. In French it is a cardabelle, which turns out to be carlina acanthifolia (a sort of thistle which was once used in traditional medicine).

The other charges are ewes' heads.

Chapé: A division of the field, used in French heraldry, created by drawing two lines from the centre of the upper edge of the shield towards the outer bottom edges (creating a triangle), with the tincture being applied to the two upper portions which the triangle divides.

Today (19 July) is the last day the Tour spends in southern France. Privas in the Départment of Ardèche has a CoA that is depicted on Wiki thus:

Chris Green wrote:Clearly an oak tree with acorns. Not so according to the blazon: D'argent au chêne terrassé de sinople, englandé d'or au chef d'azur chargé de trois fleurs de lys d'or. The tree is supposed to be a chestnut, hardly surprising since Privas' most famous product is sugared chestnuts.

Chêne (chesne) is a faux ami for chestnut. Chestnut tree in French is marronier.

Of course, it could be that both the blazon and the image on Wikipedia are wrong, but they do match.
Joseph McMillan
Alexandra, Virginia, USA
Top

Zut! At least it proves that not everyone takes my words of wisdom at their face value!
Chris Green
IAAH President

This is a good illustration of my argument against the "blazon always prevails" orthodoxy.

Let's suppose that a town known for its chestnuts adopts a coat of arms depicting a chestnut tree. The king decides to honor the town with an augmentation, such as a chief of France Modern. The king's heralds, who don't know anything about local agriculture but know that when they see a deciduous tree on a shield, it must be an oak, proceed to enshrine in the official records the blazon, "D'argent au chêne terrassé de sinople, englandé d'or au chef d'azur chargé de trois fleurs de lys d'or."

Heralds are not popes, and colleges of heralds are not ecumenical councils. We shouldn't suppose them to be incapable of error.
Joseph McMillan
Alexandra, Virginia, USA
Top
Post Reply
48 posts