Just playing devil's advocate - I do agree with Joe's assessment & argument - but is there serviving evidence of the supposed pre-augmentation civic arms with a chestnut tree, either blazon or emblazon?

Of course, if there were, the townsfolk might well have figured that graciously and humbly accepting the incorrect but royally granted and augmented arms was preferable to making a fuss and irritating the King ...
Michael F. McCartney
Fremont, California
Top

Stage 16 takes the Tour largely through Dauphiné, whence came the title of the heir to the French throne. The area was formerly the Counties of Albon and Vienne within the Holy Roman Empire, but was renamed the Dauphiné of Viennois in the 12th century, its rulers being called Dauphin and their arms an heraldic dolphin. The area was bequeathed to the French King Philip VI in 1349 by the last Dauphin, it being stipulated in the treaty that the heir to the French throne would hold the title of Dauphin. (King Philip was probably grateful for this acquisition, remote as it was from Paris, having only recently having been defeated by the English at the battle of Crécy, lost Calais, and having the population of France decimated by the Black Death.)

The arms of the Dauphin prior to French rule:

and the current arms of Dauphiné (the same as the former arms of the heir apparent of France):

PS: Does anyone know why Count Guy IV of Vienne should have taken a dolphin on his CoA? The area over which he ruled was not coastal.
Chris Green
IAAH President

In answers from Yahoo I found this:

Perhaps the motto was also a pun on "de Vienne." It may be a stretch, but I've seen some that stretch things even further, e.g., the motto of Wray, "Le juste et vray."
Joseph McMillan
Alexandra, Virginia, USA
Top

Today (21 July) is a rest day for the Tour. Tomorrow the riders depart from Digne-les-Bains, proud possessor of one of the nastiest CoAs I have found so far while putting together this thread:

These arms are not attested before the 17th century and the above composition is only one variant among many others existing. The "L" can be gold and can be replaced by silver lions. There are also versions without the golden "L" or lion: "azure to a fleur de lis of gold, accompanied at head by a cross of silver with a letter "D" of the same at the point". The latest version is "azure to a cross of gold at head and a "D" of the same at head". The cross is an evocation of the episcopal see, and the "L", perhaps, is a souvenir of a concession of Louis II of Anjou, from the beginning of the 15th century. Gabriel Gillybœuf proposed in the early 1980s to replace the capitalised "D" with a fountain expressed in heraldic terms by "a bezant fess, wavy silver and azure" (while maintaining the cross, fleur-de-lis, and capitalised "L" respectively). The city was jointly owned by the Counts of Provence and the Bishops of Digne. Hence the arms: The cross symbolises the bishopric, the fleur-de-lis as Charles of Anjou,[clarification needed] Count of Provence. The letter "D" is the letter of the city. The letters "L" have been added under Louis XIV, King of France, Count of Provence and Forcalquier.

Today (23 July) the Tour toils through the French Alps finishing in Saint-Jean-de-Maurienne (or as it used to be called, simply Maurienne) in Savoie. Savoie has no less than 62 Communes whose names are saintly. Maurienne's CoA spreads benisons on its 8,000 inhabitants and innumerable skiers: 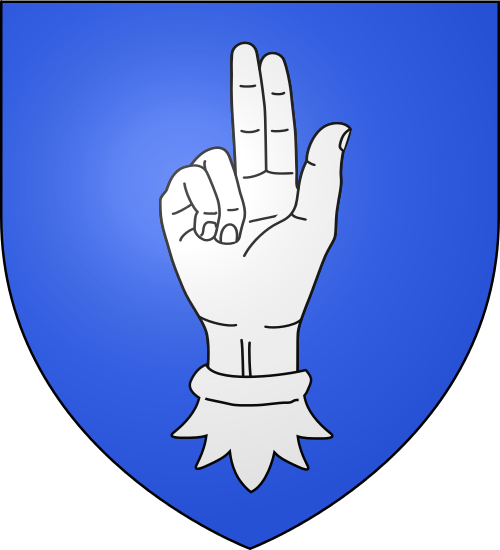 The origin of the arms is said to have been a legend that St Thecla of Iconium brought relics of St John the Baptist in the form of three of his fingers to Maurienne, though St Thecla is primarily associated with St Paul.
Chris Green
IAAH President

Today (24 July) the Tour does not stray far from Saint-Jean-de-Maurienne, yesterday's finish. It passes close by the commune of Saint-Francois-Longchamp, which, if Wiki is to be believed is graced with the undifferenced arms of the Ducal House of Bourbon:

One might imagine that the family originated in Saint-Francois-Longchamp, but they actually hailed from Clermont-en-Beauvaisis which is in northern France. Sadly googling reveals only that the area is a popular ski resort.
Chris Green
IAAH President

Tomorrow (25 July) is the last stage in the Alps before the final in Paris. The departure is from Modane which has an unusual CoA:

Would anyone like to try an English blazon?
Chris Green
IAAH President

I can't see any actual technical violation of any heraldic rule, but not a design that appeals to me.
Michael F. McCartney
Fremont, California
Top

Today (26 July) sees the final stage of the Tour, from Sèvres to the Champs-Elysées.The CoA of Paris is too well known to be included here, but that of Issy-les-Moulineaux, one of thecommunes through which the cyclists will pass, is worth a look.

Issy was once plain Issy, but in 1893 added the name of a hamlet within its boundaries once famed for its windmills. In 1911 Issy was chosen as the site of the airfield for the departure of the Paris to Madrid Air Race, and became world-famous as the site of one of the worst aircraft disasters of the pioneering days.

In 1919 Issy became the base for the luxury car company Avions Voisin, which had previously manufactured aircraft at a factory at Billancourt just across the river Seine. The small airport at Issy has been a heliport since as long ago as 1953.

The French blazon illustrates the risks of using modern charges: D'azur au filet en sautoir d'or cantonné en chef d'un aéroplane d'argent, en pointe et aux flancs de trois moulins à vent du même ouverts de sable. "Un aéroplane" might just have been acceptable if the blazon was pre-WW1, but even then it would not have been clear whether the plane was to be depicted from above (as emblazoned above) or from the side (and then dexter or sinister, monoplane, biplane?). Thereafter one has the option of following the original emblazonment, guessing that the intention was to recall the days of pioneer aviation, or ... including whatever plane, in whatever attitude, one's fancy lights upon.
Chris Green
IAAH President