Last year the Forum followed the Tour de France and La Vuelta a Espana by means of the civic heraldry to be found en route. This year I thought I would add the Giro d'Italia to our cycling heraldic itinerary.

This year's premier Italian cycle race starts on Friday 6 May, logically enough, in Apeldoorn, which is a city in Gelderland, Netherlands. It seems that these days no cycle event worth its salt can start in the country to which it belongs! 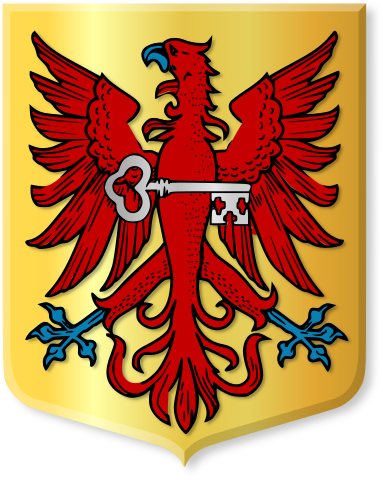 and those of Gelderland (Guelders):

Strictly speaking the citizens of Gelderland have no claim on the sable lion as that belongs to Julich, which is across the border in Germany. The two areas were once however ruled by the same Duke (see next post).
Chris Green
IAAH President

Tomorrow's second stage of the Giro takes the riders from Arnhem to Nijmegen, "A Bridge Too Far" territory during WW2.

Arnhem's CoA, like many communities in the Netherlands, has the double-headed displayed eagle: 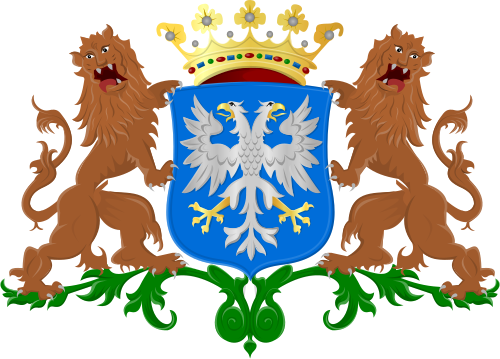 In Arnhem's case the use of the eagle is well justified since Arnhem means "home of the eagle" in Dutch and the Romans called the place "Arenacum" which means "with eagles".

The inescutcheon azure a lion rampant queue-fourché or armed and langued gules was the CoA of Guelders in the 13th/14th centuries.

Duke William I of Guelders and Julich was in 1390 the first continental head of state to be made a Knight of the Garter. There had been non-English KGs from the very first days of the Garter, but they owed allegiance to King Edward III. 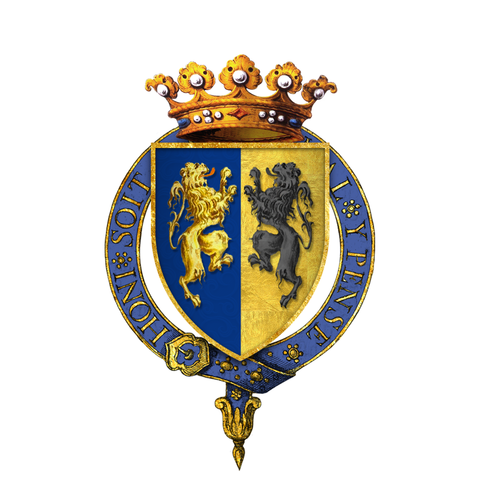 Note that the Duke's CoA has the lions of Guelders and Julich counter-rampant, which makes for a more attractive whole than having the lion of Julich apparently chasing that of Guelders.
Chris Green
IAAH President

[I wrote this post before realising that there is in fact another stage in the Netherlands today, from Nijmegen back to Arnhem.]

The next stage of the Giro isn't until Tuesday, as the whole show has to be shifted from Gelderland to Calabria. Fortunately the riders do not have to cycle the whole way.

I should perhaps here insert a health warning. Some of the Italian civic "heraldry" that you will see during the coming days seems to have been designed by people who, to put it kindly, have never opened a heraldry book in their lives.

Given that we have a couple of days to go before the cyclists bestride their tubular steeds once more, let us look first at the region to which they are currently travelling: Calabria. This is Calabria's logo, fancifully called a coat of arms by Wiki: 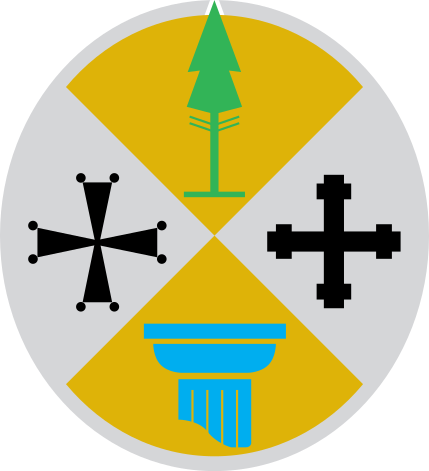 The elements of the arms seem to have no connection with the Kingdom of Sicily, the Kingdom of Naples, the Kingdom of Aragon or the Kingdom of Italy, all of which held sway in the area at one time or another. The Doric capital relates to the Greek colonies that once flourished in the area, and the Byzantine Cross, if that is what it is, seems logical as the Byzantine or Eastern Roman Empire once ruled southern Italy, but the pine tree is something of a mystery since the two trees important to Calabria's economy are the olive and the Bergamot orange. What the Cross Crosslet is supposed to refer to I have no idea.

The Province of Reggio Calabria which forms the toenail of Italy (if Calabria is the toe) at least boasts a proper CoA: 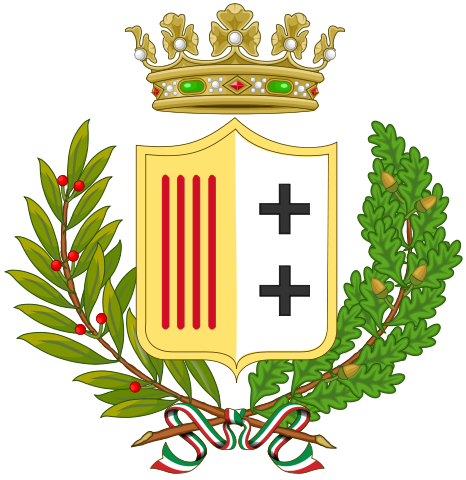 The dexter half of the arms is a version of the Aragonese Or four Pallets Gules, but I have yet to work out the reason for Argent per pale two Crosses couped Sable forming the sinister half, though they are repeated (although as Crosses Potent) in the arms of the neighbouring Region of Catanzaro:

The oak sprigs gracing the arms in lieu of supporters I recognise, but are the others olive? The leaves look like olive, but red berries?

I'll save up the arms of the municipality of Catanzaro for Tuesday, when the race starts from there. Let me just warn those of a delicate disposition to have their medication to hand.
Chris Green
IAAH President

Acctualy the Cross Crosslet is in the Italian description called a Croce Potenziata (a Cross Potent)* so the artist have painted it wrong. A Cross Potent also makes more sence since it was the Arms of the Ancient Province of Calabria Citra in the Kingdom of Naples/Two Scilies.

Here we also can see that the Pine Tree is to represent the Forest of Sila and the natural beauty of Calabria.
Last edited by Marcus Karlsson on 09 May 2016, 19:49, edited 1 time in total.
Top

Actually the Cross Crosslet is in the Italian description called a Croce Potenziata (a Cross Potent) so the artist painted it wrong. A Cross Potent also makes more sense since it was the Arms of the Ancient Province of Calabria Citra in the Kingdom of Naples/Two Scilies.

So today the Giro gets going again, home in Italy at last. As mentioned earlier Calabria gets the honour of the first stage, from Catanzaro to Praia a Mare.

Catanzaro's CoA has something of an African look, with an egg-shaped shield on the breast of an eagle:

And yet I find that the use of the imperial eagle in this manner was granted to the town as long ago as 1528 by Emperor Charles V. Giving the eagle the job of holding the motto in its beak is I suppose innovative, but the crown hovering above its head does not help. Incidentally the motto "sanguinis effusione" mean "by the letting/effusion of blood. Our Scandinavian members will probably gnash their teeth at the tincture clash between the gules field and the vert tremount.

I found another emblazonment which makes the first look positively attractive:

The arms of Praia a Mare refer to the grottoes to be found above the town, one of which was long ago turned into a church: Madonna della Grotta:

The wreath surrounding the shield seems to be a common adornment. In this case the sinister half is oak and the dexter I can only conclude is olive, though once again the "olives" look odd to me.
Chris Green
IAAH President

Today the Giro starts from yesterday's goal, Praia a Mare, and makes its way to Benevento, capital of the province of the same name, in the region of Campania.

It is a relief to find the heraldry here more traditional. The arms of the city of Benevento are:

The boar is probably intended to be the mythological Calydonian Boar. In the 6th century AD the historian Procopius wrote that the inhabitants of Beneventum displayed what they claimed were the tusks of the Calydonian Boar as proof of the antiquity of the city.

Following the occupation of Italy by Napoleon, his Foreign Minister, Charles-Maurice de Talleyrand-Périgord, was made Prince of Benevento. His arms as Prince include the Benevento boar:

The arms of Benevento province bear no resemblance to those of the city: The arms of Campania are about as simple as one can get:

Why not laurels?
Top

Admittedly the leaves do look something like laurel, but laurel's fruit is a small black berry. Moreover laurel disappeared from the Mediterranean basin 10,000 years ago. Olive on the other hand is ubiquitous in southern italy. The olive fruit is green and when ripe purple (black olives have been processed). I suppose the red berries in these heraldic sprigs might be supposed to represent ripe olives.
Chris Green
IAAH President