Apparently neither. According to the municipality's website ( http://www.comune.foligno.pg.it/categorie/142 ), as translated by Google, this is a marshalling of two coats of arms. The Argent section would thus be the upper half of a shield divided per fess.

My Italian is theoretically non-existent, but applying my French and latin, I conclude that Foligno's arms were in fact combined from the arms of "il capitano del popolo" (captain of the people) Per fess Argent and Gules in chief a Cross Formy of the second and of the city Gules a Fleur de Lis Or. The captain of the people was a magistrate appointed by the non-noble elements of the city.

The only problem with this explanation is that the most famous capitani of Foligno were of the Trinci family whose arms are:

The text is not very detailed. But it seems that the city once used a coat of arms with two shields; one with a cross — possibly a badge, not proper arms, of capitano dei popolo —, the other with a (green?) fleur-de-lis. These two shields where later combined. The bottom half of dexter seems to not be part of none. My Italian is very basic, so there may be errors.

By the way, the arms of the Trince of Foligno were like following:

(The so-called "Heraldry Institute of Rome" is just a bucket shop.)
Top

Wednesday's stage starts from the city of Modena. So why start this post with a version of the English royal arms?

Well these were the arms of Queen Mary, second wife of King James II, whose maiden name was Maria Beatrice Anna Margherita Isabella d'Este. She was the daughter of Duke Alfonso IV of Modena. It was her marriage to James, Duke of York and ultimately the birth (after many miscarriages and still births) of a son, James, that led to the Glorious Revolution which deposed James II. James's marriage to a Roman Catholic had caused concern among Protestants, and the birth of a male heir was greeted with consternation and the invitation to Wliiam III Prince of Orange to invade England. That Mary's Roman Catholic faith was unpopular can be seen in the CoA which illustrates a simplified version of the Este arms. As can be seen below, the full arms include the papal keys, and that was considered far too provocative:

The city of Modena has arms that were granted in 1934 but are based on arms originating from the 18th century: The geological drills behind the arms (why? they are not insignia of office) appear behind the cross in the arms of the province of Modena as they do in the arms as used during the Napoleonic occupation: 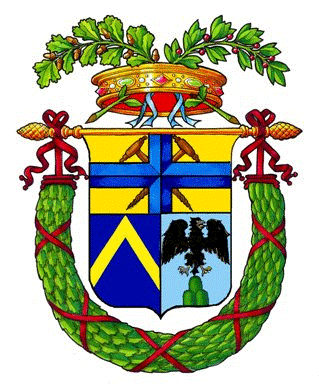 Wednesday's stage finishes at Asolo in the province of Treviso in the region of Veneto.

The arms of Veneto are, unsurpringly, the stately Lion of St Mark:

The arms of the city of Treviso are:

though there seems to be some doubt among heraldic artists as to whether the cross should be a latin cross (longer shaft) as shown, or a plain cross (with all arms of equal length), in which case it would be a version of the arms of the former Kingdom of Italy.

The arms of the province of Treviso are apparently completely different: The province is generally considered to be the continuation in modern times of the March of Treviso (Marca Trevigiana) and the motto "Monti Musoni Ponto Dominorque Naoni" is a quote from a 12th century verse, the explanation of which I have discovered in Italian (and have no intention of trying to translate other than to say that it refers to the extent of the March's borders):

Tomorrow's (Thursday) stage takes the Giro across the plain from Noale to Bibione.

Noale's arms are a further cause of anguish to those who consider that the alphabet has no place in heraldry: At a guess the C and N stand for Citta and Noale.

On the road the cyclists pass through Portogruaro which has canting arms: The tower is the old tower of the city gate (Porto) and the cranes (grus) are its guardians.

Bibione is merely a "frazione" of the city of San Michele al Tagliamento whose arms are:

Friday's stage starts from Palmanova in the province of Udine and Friuli Venezia Giulia region. Its CoA features, unsurprisingly, a palm tree, and also a lion to represent the overlordship of Venice: The most interesting aspect of Palmanova historically is that it was a virtually perfect star fort, the dream of every fortress builder in the 16th-18th centuries.

At its greatest extent after the Napoleonic occupation the fortress consisted of no less than 9 ravelins, 9 bastions, 9 lunettes, and 18 cavaliers. Sadly it was less successful as a city than as a fortress. Intended to be a sort of humanist Utopia, no-one actually wanted to live there, to such an extent that in 1622 Venice had to offer land and building materials to its pardoned criminals. this eagle has a lot more life in it than the poor dead spreadeagle of Udine, which it inherited from the Patriarchate of Aquileia (Patriarcato di Aquileia): Chris Green wrote:The city of Modena has arms that were granted in 1934 but are based on arms originating from the 18th century:

The geological drills behind the arms (why? they are not insignia of office) appear behind the cross in the arms of the province of Modena as they do in the arms as used during the Napoleonic occupation:

The motto "Avia Pervia" means "The difficult path made easy" and not as Google translate suggests "Grandma accessible"!

I acctualy think the placing of the Drills behind the Shield in the Modena Arms is a misintrerpetation. The blason in Italian reades "D'oro, alla croce d'azzurro accollato da due trivelle di ferro e oro in croce di Sant'Andrea" which does if I understand corectly means that the Drills in Saltire is placed in the Shield with the Cross over them (debruised?)
Top

One might be forgiven for thinking that Friday's stage ends up in Austria since the arms of Cividale del Friuli are also those of Austria:

The reason for this goes all the way back to 776 AD when the last Lombard resistance in northern Italy was overcome by Charlemagne and the city named Forum Julii by Julius Caesar in 50 BC was renamed Civitas Austriae (City of the East). Cividale's name in German is still Östrich.

One of Cividale's most famous sons was Fiore Furlano de Cividale d'Austria (c 1350- c 1409), who was the first Italian master of martial arts (jousting, sword and polearm fighting).

Cividale was in fact Austrian, but only from 1815 to 1866, when it was part of the Austrian Kingdom of Lombardy-Venetia. The sources I have consulted do not say, but I imagine that the current name of Cividale del Friuli dates from the ousting of the Austrians from northern Italy and the formation of the Kingdom of Italy.

Would anyone care to tell us what the medal is that is pendant from the wreath?
Chris Green
IAAH President