So Cividale was at some point awarded the Medal of Military Valour in silver; the next question is when and why? Looking at a map of Italian military operations in World War 1, one finds that Cividale was strategically important, south west of Caporetto, during the battles on or around the Isonzo and Piave rivers (it was on this front that Oberleutnant Erwin Rommel won the Pour le Mérite (between 25 and 27 October 1917, with a force of just 150 men he captured 81 guns and 9,000 men (including 150 officers), for the loss of just 6 dead and 30 wounded). One can well imagine that Cividale was to Italian soldiers the first place one could gain some respite from the front, much as Poperinghe was to soldiers fighting around Ypres.

According to this page -- http://www.istitutonastroazzurro.it/com ... riuli.html -- as translated by Google, Cividale was awarded the decoration in 1979 for its service and suffering during the Nazi occupation in World War II. The region supported the partisan forces fighting the occupation, 404 local partisans and civilians were killed, many people were deported, and towns and villages were destroyed.
Regards
Arthur Radburn
IAAH Vice-President : Heraldic Education
Top

On an educational point : this thread demonstrates the system of mural crowns and coronets which are used to indicate different categories of local authority in Italy. The current system was laid down by Royal Decree 652 dated 9 June 1943.

A province has a jewelled circlet surrounding branches of oak and laurel, as seen above the arms of Udine : A city has a gold mural crown with two "storeys" and eight towers (five visible), as seen with the arms of Noale : A 'comune' has a silver mural crown with sixteen towers (nine visible), which we see with the arms of Bibione :

Some local authorities are allowed, for historical reasons, to have noble coronets. Modena, Foligno, and Benevento are examples of this.

Arthur Radburn wrote:According to this page -- http://www.istitutonastroazzurro.it/com ... riuli.html -- as translated by Google, Cividale was awarded the decoration in 1979 for its service and suffering during the Nazi occupation in World War II. The region supported the partisan forces fighting the occupation, 404 local partisans and civilians were killed, many people were deported, and towns and villages were destroyed.

Thank you Arthur. The people of Cividale were clearly even more directly involved in WW2 than WW1.

Strangely the Italian blazon refers to two awards: the war merit cross and the silver medal for military valour, but only the latter is shown in the illustration:

Today (Saturday) the Giro struggles through the Dolomites. The province of Belluno has a complicated CoA, whose Italian blazon is:

The centre pale is the arms of the town of Belluno, which also gives its name to the province:

Dexter are the arms of Feltre:

and sinister the arms of Pieve di Cadore (the illustration is of the badge of the former "Cadore" Alpine Brigade (Brigata Alpini "Cadore"): 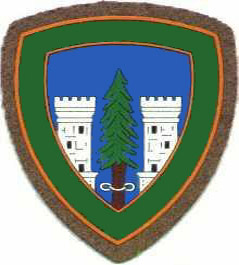 There is more than one version of the Feltre arms. This one ...

The change of coronet indicates a change in municipal status, but I wonder whether that also accounts for the change in the tincture of the castle.
Regards
Arthur Radburn
IAAH Vice-President : Heraldic Education
Top

Sunday's gruelling time-trial starts from Castelrotto in South Tyrol (Alto Adige), or as 95%+ of the inhabitants would call it Kastelruth. Its arms are probably a play on the "Kastel" part of the name, but there is no castle. On the other hand there are many mountainous outcrops that might be represented by the raguly bend (ah but it doesn't start from dexter chief so it isn't really a bend, and is it really raguly?):

The autonomous province of South Tyrol is a political oddity, being a largely German-speaking area annexed to Italy following the Austrian defeat in World War 1. Italianisation under Mussolini largely failed except in the more densely populated areas of Bolzano/Bozen and Merano/Meran and German remains the principal language. The former political status - the Princely County of Tyrol - is recognised in the "Euroregion" of Tyrol-South-Tyrol-Trentino and in the coat of arms of South Tyrol: 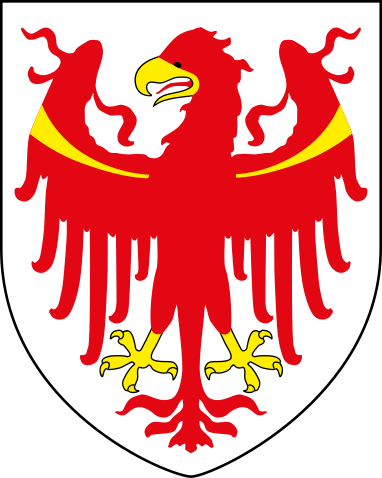 which look suspiciously like the old arms of Gefürstete Grafschaft Tirol: 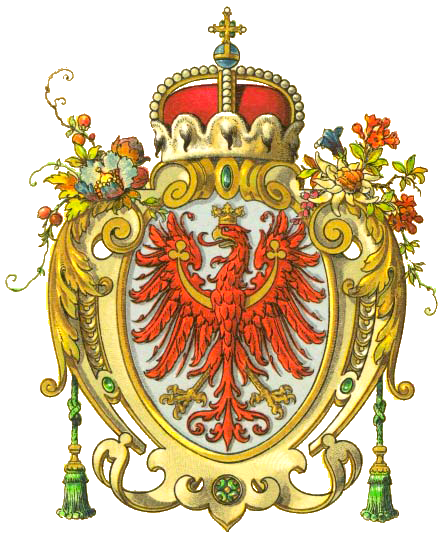 Chris Green wrote:Sunday's gruelling time-trial starts from Castelrotto in South Tyrol (Alto Adige), or as 95%+ of the inhabitants would call it Kastelruth. Its arms are probably a play on the "Kastel" part of the name, but there is no castle. On the other hand there are many mountainous outcrops that might be represented by the raguly bend (ah but it doesn't start from dexter chief so it isn't really a bend, and is it really raguly?):

According to a few websites which I consulted, the arms are derived from those of the family which were the lords of the area in the 11th century. Various Italian and German blazons describe the arms along the lines of a silver battlemented wall on a blue field. If they really are battlements, then the wall must be in perspective (which might account for the shading), but perhaps there's an Italian/Austrian/Tyrolean heraldic convention in this regard. To my English eyes, it looks like 'Per bend abaisse raguly Azure and Argent'.
Regards
Arthur Radburn
IAAH Vice-President : Heraldic Education
Top

Monday is a rest day for the Giro d'Italia, so I thought I would illustrate the arms of Italy. The current "emblem" is a post-WW2 device reminiscent of Soviet Russia. Its only saving grace is that the star is white rather than red (and even that has a thin red border).

That such an obviously socialist/communist device should have been chosen is very odd, given that the recently elected government that decided on it in 1948 was Christian Democrat (and had won by a landslide). Even more strange is that it has survived nearly 70 years despite most of the many governments being right of centre.

The Italian armed forces were clearly having nothing to do with the symbols of socialism. The naval ensign (1947) sports a clever CoA combining the arms of the four principal Italian naval states: Venice, Genoa, Amalfi and Pisa with a Roman "corona rostrata" (awarded to victorous naval commanders):

The arms of the Italian army are an example of trying to hard to depict everything and achieving a jumble. Virtually the only missing elements are a tank and a helicopter (they nearly forgot the grenade, but squeezed it into the motto!): 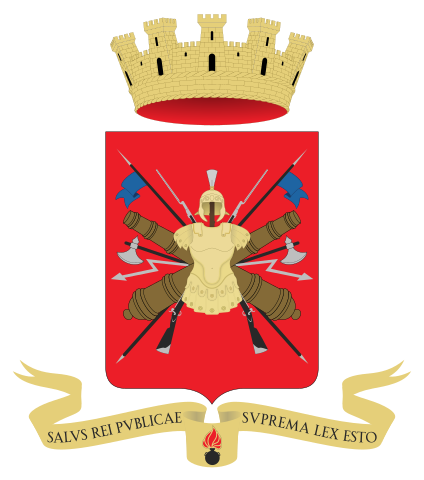 The Air Force followed the example of the Navy with a CoA of 4 quarters. Q4 is obviously Venice. I'll see if I can identify Q1 Q2 and Q3 later: 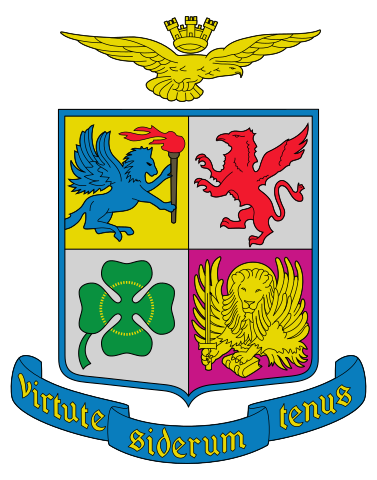 Incidentally Italian practice is for each "Stormo" (Wing) to have a CoA rather than a badge for each Squadron as in UK and Commonwealth practice.

The Carabinieri is the only element of the armed forces of Italy whose CoA has a direct link to the previous monarchy, using the red field and white cross of Savoy: 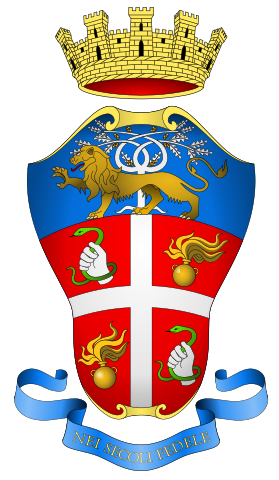 The Italian blazon is to be found here:

(Previous versions can be found in the menu at the right hand side.)
Chris Green
IAAH President

Today (Tuesday) the Giro resumes at Bressanone, better known to the majority of its inhabitants as Brixen and to skiers as Piose.

The CoA is hardly original, being the Agnus Dei: The official blazon is:

So the emblazonment to be found on Wikipedia with the lamb standing on a base vert is inaccurate. Arguably Brixen's most famous son was Oswald von Wolkenstein (1376/7-1445) whose life was nothing if not eventful - poet, composer, diplomat, soldier. 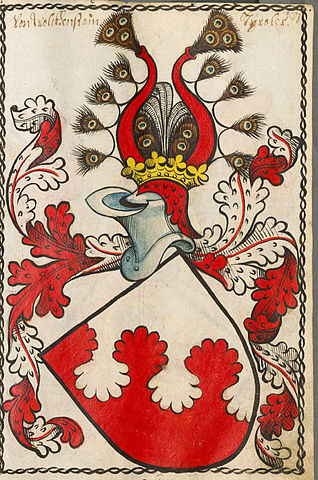 Anyone interested in early music should look up von Wolkenstein in Spotify. "Durch Barbarei, Arabia" is well worth a listen.
Chris Green
IAAH President