2017 sees the 100th Giro d'Italia, starting today (Friday) from Alghero on the west coast of Sardinia.

Alghero's arms bear witness to the area's former rule by Aragon, and indeed its continuing linguistic links with Catalonia. 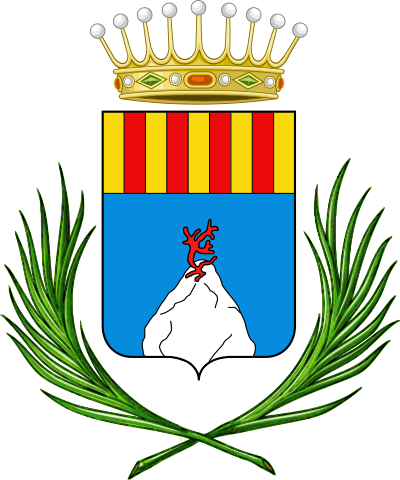 I could not immediately fathom what the red twig-like feature is on top of the rock. Surely not coral, I thought. But Wiki put me right:

Corallium Rubrum
The coral of Alghero, is known as among the finest in the Mediterranean and the world for the particular reputation of quantity, quality, compression and the ruby red color, much to remember one of the most important economic aspects of the territory, also called the Riviera del Corallo, and have in his coat of arms a branch of the precious red coral on a foundation of rock. For the particular combination with the jewelery and goldsmith craft is also called red gold so much so that it is sold at the same price of the precious metal.

The first stage finishes at Olbia

Whether the sea is intended to be azure and the sky bleu-celeste is a mystery (so far).

The arms of Sardinia feature four Moors' heads, that have been at various times bearded, bandaged around the head and blindfolded. From 1999 the Autonomous Region has had the heads facing sinister. 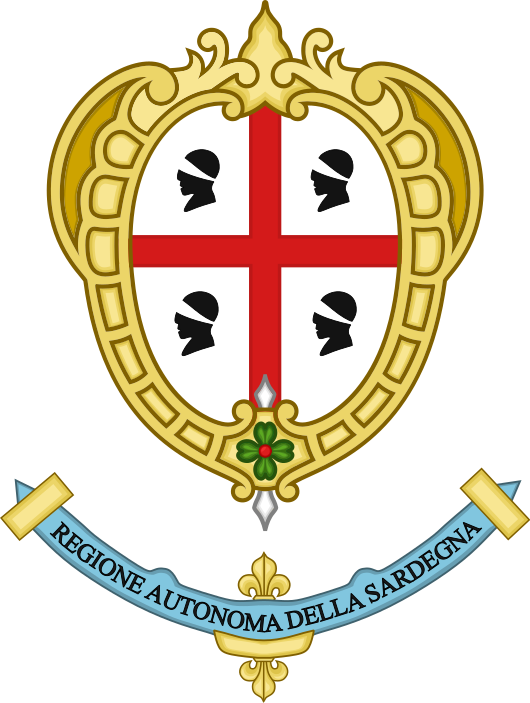 Whether the sea is intended to be azure and the sky bleu-celeste is a mystery (so far).

Comment: If blazoning in English, I would say "In a seascape...proper" rather than trying to distinguish shades of blue. "Realistic" heraldry like this doesn't lend itself to traditional blazonese, in my opinion.
Joseph McMillan
Alexandra, Virginia, USA
Top

Today's (Saturday) stage starts from Olbia and proceeds through the mountainous interior of Sardinia to Tortolí on the east coast.

Depending on where one looks, there seem to be two candidates for Tortolí's arms (though the second version seems to have been designed by a poorly programmed computer:

The tower in the "proper" arms is in the hamlet of Arbatax and is known as the "Spanish" tower, and was probably built in imitation of the Genoese towers that we English know as "Martello Towers".

Harking back to an earlier discussion (here or elsewhere?) re: arms of island nations, one might conclude that Tortoli is a province of the Kingdom of Tonga.

Today (Saturday) is the last day for the Giro in Sardinia. The finish is at the island's capital, Cagliari.

I found this web page by a local graphic designer. It is a good (?) example of how graphic designers play fast and loose with heraldry, without a great deal of knowledge of the subject. Sadly this is the version now adopted by the communal authority.

These were Cagliari's arms during the period that Sardinia was ruled by Aragon (typically on a lozenge). 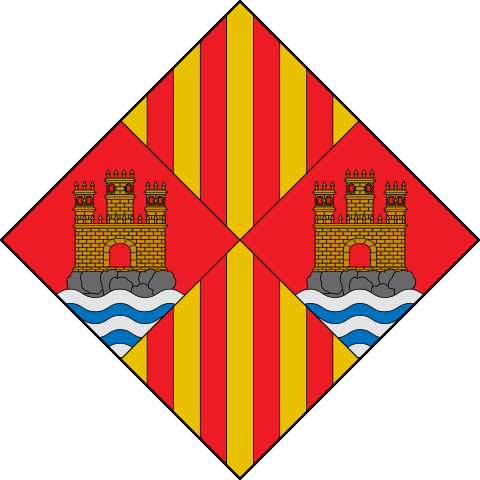 There seems to be no decent modern depiction of the correct current arms of Cagliari, which are as far as I can make out supposed to be: Quarterly 1st and 4th Gules a Cross Argent (Savoy), 2nd and 3rd Gules arising from a Base of Waves of the Sea Argent and Azure an ungated windowed Castle with three towers upon Rocks all proper.

I clicked on the link Chris provided to the local graphic designer, expecting to find yet another clueless distortion; but was pleasantly surprised to see a very simple but heraldically correct (at least as to the shield) exercise of artistic license. Different style and feel from the older renditions, and certainly not up to the work of such modern Masters as Marco Foppoli, but still to my mind quite nice.

)... but if we're not at least as open to modern styles as we would like younger folk to be to our preferred historical or antiquarian styles, we may be the last generation to find heraldry appealing and worth study...
Michael F. McCartney
Fremont, California
Top

... we may be the last generation to find heraldry appealing and worth study.

I very much doubt it. As for "modern" style, once upon a time baroque heraldry was all the rage. Need I say more?
Chris Green
IAAH President

Today (Monday) is a rest day in the Giro while the teams relocate from Sardinia to Sicily. The current arms of Sicily are:

The three-legged device is called the "Trinacria". Depending on one's source this either represents the three-cornered shape of Sicily with the head of Medusa, or one of the "Hormitans", according to myth the primordial inhabitants of the island.
Chris Green
IAAH President

Michael F. McCartney wrote:I clicked on the link Chris provided to the local graphic designer, expecting to find yet another clueless distortion; but was pleasantly surprised to see a very simple but heraldically correct (at least as to the shield) exercise of artistic license. Different style and feel from the older renditions, and certainly not up to the work of such modern Masters as Marco Foppoli, but still to my mind quite nice..

I agree entirely. I think this is an excellent example of correct use of heraldry in a modern artistic vernacular. In fact, the way the artist has done the 2nd and 3rd quarters is much more classically heraldic than the realistic seascape in the more traditional emblazonments, even if he has tampered a bit with the tinctures. And the monochrome versions are no more objectionable for being in monochrome than the most Gothic, rococo, or neoclassical of emblazonments carved in stone or engraved on metal.
Joseph McMillan
Alexandra, Virginia, USA
Top
Post Reply
47 posts