Air Force Heraldry in the Commonwealth

Heraldry of the armies, navies and airforces of the world
Post Reply
17 posts

Air Force Heraldry in the Commonwealth

Following the creation of the Royal Air Force in 1918 it was felt the need for a system of Unit Emblems to create order among the rather plentiful of styles for Unit Emblems that existed during the World War I. But it wasn't until 1935 that Chester Herald at the College of Arms was assigned the post of Inspector of RAF badges. In this he was to advise the Air Council on heraldic matters and regulate the display of authorised Badges. And since then when HM King Edward VIII signed the first seven Badges in May 1936 over 1 000 Badges have been authorised for RAF Squadrons, Stations and other Units.

The Basic design of the Badges have since been keept with one execption, upon the accession of Queen Elizabeth II the crown on top of the Badge was changed from the Tudor Crown to the St Edward's Crown. Otherwise the Badges are round with a Brodure carriying the designation of the Unit, the Badge is as noticed crowned and it is in the case of RAF surrounded by Laurel Leaves (other Commonwelth Countires have other national symbols like Maple Leaves of the Royal Canadian Air Froce). To this is added below a Scroll with a Motto, which can be in any language mostly Latin and English but the can also be found in French, Dutch, Norwegian, Czech, Afrikaans, Arabic, Malay, Matable and others.

No 35 Squadron with the original Tudor Crown, note that this Squadron display the Number in Roman Numerals XXXV. A few Squadron does that, but I don't know the reason for this. This was an unofficial Emblem successfully converted into and Offilial one. It symbolises co-operation with Cavaly in the 1914-18 War. The Motto translates as We act with one accord. The Present design whit the St Edward's Crown. Here The Air Command created 1 April 2007 by merging the Strike Command with the Personnel and Training Command.

During World War II there was created from persons from German Occupied Countries a number of RAF Squadrons in the 300 Series. These where granted Badges in the RAF style and after the War Dutch and Norwegian Flyers would take these to their Home Countries where they where adapted with some national adjustements. The Belgians acctualy chosed to continue to use the Badges granted to thier No 349 and 350 Squadrons. The Lagest group of 300 Series Squadrons where manned by Poles and they chose instead to adopt Badges of a distinct Polish Style. Below one example of this No 315 (Polish) Squadron:

Contiuning with the Commonwealth Air Froces, the Royal Australian Air Force (RAAF) was granted Badges sorrounded with Wattle a national Emblem of Australia, the Royal Canadian Air Force (RCAF) Badges was granted the Maple Leaves and the Royal New Zealand Air Force (RNZAF) the Fern Leaves all national symbols. The Royal Malaysian Air Froce (RMAF/TUDM) have Rice Stalks surrounding the Badge which is crowned by the Malaysian Royal Crown. Commonwealth Countries beeing Republics have in many cases keept the original Badge frame but have replaced the Crown with some national symbol, also the Laurel have been replaced. The Indian Air Force (IAF) have on top of the Badge the Ashoka Lion Pillar and surrounding the Badge is Lotus Flowers, The Pakistan Air Force (PAF)have a five pointed Star on top of the Badge which is also surrounded by Lotus Flowers they are however in a different position for the Indian ones. All Pakistani Mottoes are also written in Arabic as they mostly are taken from the Quran. Sri Lankan Air Force (SLAF) Badges has the National Emblem on top and what appears to be Laurel surrounding. RNZAF Badges can be found in this thread http://rnzaf.proboards.com/thread/12522/various-rnzaf-badges?page=1&scrollTo=1292
Top No 403 Squadron, RCAF with the present English-French Bilingual Pattern. The Wolf is a fierce and powerful antagonist, and is indigenous to most parts of Canada.

Some RCAF Badges the old Pattern. No 409 Squadron. The Cloak and Crossbow symbolises the orignal role of No 409 Squadron as a Night-Fighter Squadron. Which also explains the Motto which means "Midnight is our noon". No 1 Tactical Air Command. The Motto roughly translates as "Guardian of the North" which is symbolised by the Polar Bear rising from a Astral Crown.
Top 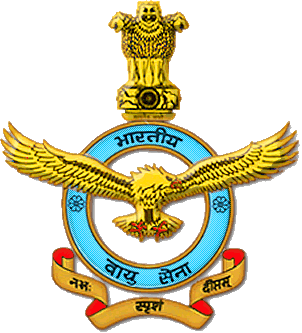 Badge of the Indian Air Force, not the Ashoka Lion Pillar on the top.

No 52 Squadron, IAF note the inscription in Sanscrit. My father was attached to 418 Squadron RCAF for quite a while during WW2. They seem to have had a badge incorporating a Mosquito at one point before receiving a more traditional badge this time illustrating an Inuit. When my father was with them they were flying Douglas Bostons in the intruder role before they graduated to Mossies.

The Badge of the No 418 Squadron, RCAF has the following symbolism: "The Inuit holding a harpoon symbolizes the function of the unit which stood on guard on Canada's northern frontiers. The ice, with its reflections, symbolizes the northland". The Motto Piyautailili translates as Defend even unto Death.

In addition to the languages mentioned above, there's a RAF Regiment squadron whose motto is written in Babylonic cuneiform : The South African Air Force version of the RAF frame, introduced 1950/51 and discontinued c1959, had protea flowers around the circlet, and bilingual wording : The Jamaican Defence Force's Air Wing badge has the helmet and crest of the national arms in place of the crown : No 1 Armoured Car Company, RAF Regiment now No 1 Squadron, RAF Regiment, has an Assyrian War Chariot as Badge. This alludes to the Armoured Cars once used, and to the deplyment to the Middle East. The Unit was raised at Heliopolis in Egypt in 1922, but when the Badge was granted in 1939 the Company was a long time resident in Iraq the ancient Assyria. The Motto translate as "Swift and sudden".

The South African Air Force /Suid-Afrikaanse Lugmag did later adopt Badges in pure Heraldic form with Shield and Motto Scrolls. Some exaples can be seen in another thread in the Military Heraldry Section.

Returning to Asia, in Hong Kong there existed before the return to China the Royal Hong Kong Auxiliary Air Force. The Badge of which was a rather curious one. It was not round, but shaped like and Octagon. Otherwise it was crowned by the St Edward's Crown and surrounded by Crysantemum Leaves.