Heraldry of the armies, navies and airforces of the world
Post Reply
9 posts • Page 1 of 1

From the official site of the Spanish Navy some exemples of Heraldry used today.

Frigate F102 Almirante Juan de Borbón. Armorial Beraings of the namegiver which was the father of King Juan Carlos I.
Last edited by Marcus Karlsson on 22 Mar 2015, 18:51, edited 1 time in total.
Top

Frigate F101 Alvaro de Bazan, Armorial Bearings of the namegiver Álvaro de Bazán, 1st Marquis of Santa Cruz de Mudela (1526-1588), He served in many Sea Battles amongs others at Lepanto 1571 and was to have comanded the illfated Spanish Armada against England but fellout with King Philip and died at Lisbon 9 February 1588 several months before the Armada sailed.

Amphibious Assault Ship L-51 Galicia. The Shield shows the Arms of the Province of Galicia.

To the Navy also belongs the Marine Infantry which is organized into the Tercio de Armada (TEAR) which have this rather elaborate Coat of Arms:

The Main Force of the TEAR is organised into the Marine Infantry Brigade.

CoA of the Marine Infantry Brigade. 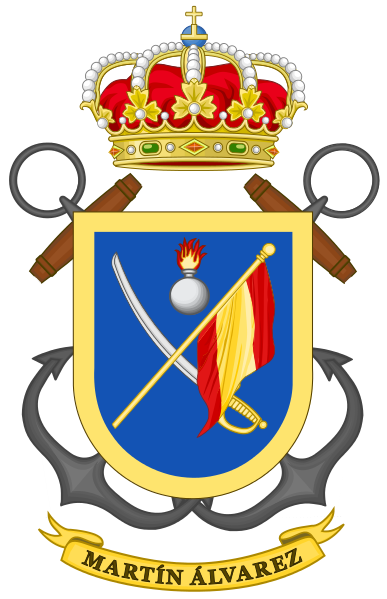 CoA of the Martin Alvarez Marine Infantry Section, this is now disbanded. It was the Security Unit assigned to the Aircraft Carrier Principe de Asturias.
Top

The other Part of the Marine Infantry is tasked mainly with Naval Base Security and Protection and is organised into the Protection Force: 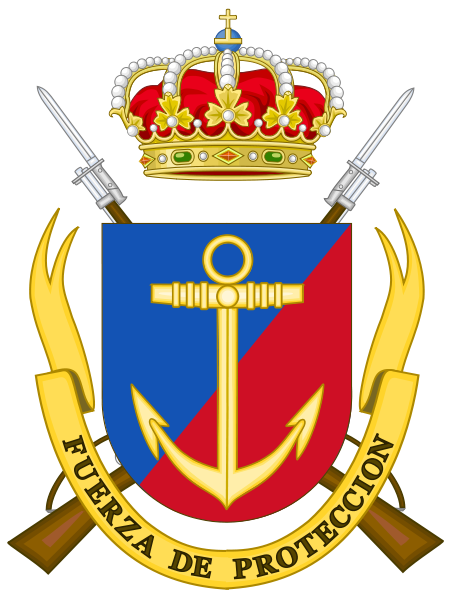 The Protection Force is made up of Northern, Southern and Levant Tercios, the Madrid Security Group and the Canarias Security Unit.

CoA of the Northern Tercio.

CoA of the Southern Tercio.

CoA of the Levant (or Eastern) Tercio.
Top

CoA of the Madrid Security Group.

Which was later replaced by the Naval Special Warfare Force: