A Red Face Among The "Time Team" Experts

A Red Face Among The "Time Team" Experts

I have been watching an old edition of "Time Team" the English (Channel 4) TV programme where archaeologists have 3 days to discover interesting things about various sites, This one was about Hopton Castle in Shropshire, a Parliamentary outpost which was besieged by a Royal army in 1644. During the excavation there was much excitement over the discovery of a gold coin. We only briefly see the obverse (a king's head) and reverse (a coat of arms) before it is passed to a lady who - without looking at the reverse - immediately opines that, as it says "Jacobus" above the head, it must be "the head of the Scottish King James V and therefore from about the time of the Battle of Flodden (1513)". We are then vouchsafed another quick view of both obverse and reverse. Clearly visible are the the following:

Later in the programme we are informed that the coin was a gold "laurel" sovereign from the 1620s. No mention of it being English, or that the King was James I & VI.

The text on the obverse is: IACOBUS D G MAG BRI FRA ET HIB REX, which might be a clue as to which King is involved. 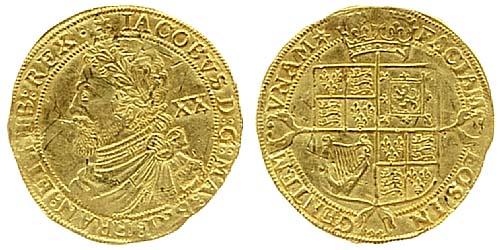 It is James I because the first never gets a number but only later when the second James appears.

It is James I because the first never gets a number but only later when the second James appears.

In the case of King James I and VI that convention does not work, since one could hardly call him "James & VI". The Latin "IACOBUS D G MAG BRI FRA ET HIB REX" is of course OK because it does not mention the number of "Bri", "Fra", or "Hib".
Chris Green
IAAH President

"Mag Bri" is the whole island of "Magna Britannia", i.e. England and Scotland (and Wales of course, but we don't ever mention that.)
"Hib" is Hibernia, i.e. Ireland.


There should be no problem about James I & VI (or later James II & VII) partly because English and Scottish coins were minted separately. According to Wikipedia there was standardisation after the union of the Crowns with, until 1610, the only difference being the use of the English style crown (cross in centre) on English coins, and Scottish style (fleur-de-lys in centre) on those from Scotland. After 1610 the Scottish version of the Royal Arms was used, i.e. with Scotland quarters 1 & 4 and France/England in 2.

I've found (online) an example of a James II & VII Scottish coin and it is the usual pragmatic muddle. It has "Iacobus II" on the obverse, not "VII." (This is correct because the style is "King of Great Britain etc." Whether in England or Scotland, James was "James the second of Great Britain.") On the reverse, it has the English style crown over the Scottish arms.
https://auctions.lyonandturnbull.com/asp/fullcatalogue.asp?salelot=261++++++272+&refno=119176&image=3
https://auctions.lyonandturnbull.com/asp/fullcatalogue.asp?salelot=261++++++272+&refno=119176&image=1
Top

Ah but the use of 'of Great Britain' was simply a conceit of James I/VI, and was mainly used on coins: on all official documents the title remained "of England, Scotland, France and Ireland, and most importantly,
England and Scotland remained separate countries (albeit under the same King/Queen) right up until 1707, so James II of Scotland was officially VII of Scotland, with William III of England being II of Scotland. (There was no separate numeral for Ireland).
Top
Post Reply
5 posts • Page 1 of 1