The Duchess of Sussex's arms have been revealed : 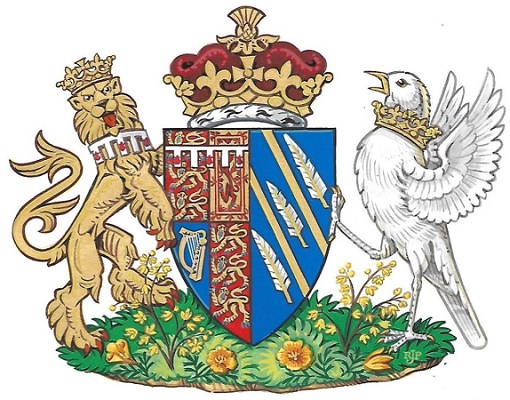 From the official statement on the Royal Family's website :

"The blue background of the shield represents the Pacific Ocean off the California coast, while the two golden rays across the shield are symbolic of the sunshine of The Duchess's home state. The three quills represent communication and the power of words.

"Beneath the shield on the grass sits a collection of golden poppies, California's state flower, and wintersweet, which grows at Kensington Palace.

"The Supporter relating to The Duchess of Sussex is a songbird with wings elevated as if flying and an open beak, which with the quill represents the power of communication.

"Mr. Thomas Woodcock, Garter King of Arms said: "The Duchess of Sussex took a great interest in the design. Good heraldic design is nearly always simple and the Arms of The Duchess of Sussex stand well beside the historic beauty of the quartered British Royal Arms. Heraldry as a means of identification has flourished in Europe for almost nine hundred years and is associated with both individual people and great corporate bodies such as Cities, Universities and for instance the Livery Companies in the City of London."
Regards
Arthur Radburn
IAAH Vice-President : Heraldic Education
Top

Beautiful design and inclusive of the Duchess' heritage from here in the US.
Regards,

According to Reuters, who do not name their source, the blazon is : “Azure a Feather bendwise Argent quilled between two Bendlets Or all between two like Feathers Argent quilled Or”.
Regards
Arthur Radburn
IAAH Vice-President : Heraldic Education
Top

So the Duke and Duchess of Sussex will no longer be Their Royal Highnesses. This makes their titles on a par with Sarah, Duchess of York, though the reason for the change is different and the decision seems to have come from the Duke himself (which suggests that they might be able to resume the HRH at some future date) whereas the Duchess of York lost her HRH by Letters Patent dated 21 August 1996. I am guessing that their arms will remain unaltered, whereas the Duchess of York's did not.
Chris Green
IAAH President

As I understand the announcement, they will remain HRHs but simply not use the title after the new arrangement comes into effect later this year. They are evidently still using the title at the moment, as an update posted on their website yesterday refers to them as "Their Royal Highnesses". Presumably they will be addressed as "Your Grace" in the future.

Despite all the hoohaa, this is not entirely unprecedented. Prince Edward, Earl of Wessex's children are entitled to be styled HRH Prince(ss) ... of Wessex, but in practice the son uses his father's second title by courtesy and the daughter is simply 'Lady'. And a century or so ago, Princess Patricia of Connaught gave up her titles as HRH and Princess when she married a commoner, and was given the title of 'Lady' as if she were the daughter of a non-royal duke instead of a royal one, but kept her arms.
Regards
Arthur Radburn
IAAH Vice-President : Heraldic Education
Top
Post Reply
6 posts • Page 1 of 1