Dan Escott (1928-87) was an English artist and illustrator. He worked at the College of Arms, before moving into advertising and magazine illustration. In 1967-68, he worked at the US Army's Institute of Heraldry, so he had some influence in the USA too. It was Escott's heraldic art and articles in Look and Learn magazine that got me interested in heraldry.

Here are a few examples, from Look and Learn. : Some, like arms of the Worshipful Company of Merchant Mariners, from a series on 'The Guilds of London' (1967-68), were conventional representations.

His series on 'Royal Beasts' (1967) showed heraldic beasts associated with the various royal families, supporting shields and banners. Here 'The White Lion of Mortimer' holds a banner of the Mortimer arms and a shield of the arms of Richard, Earl of Cambridge (d 1415) impaling those of his wife Anne Mortimer. A 1971 interpretation of King Henry V wearing his (literal) coat of arms. Note the Order of the Garter below his left knee. He sometimes did more elaborate paintings such as this one, 'Banners into Battle', showing the arms of King Edward IV and various nobles and knights.

Many of Dan Escott's magazine illustrations were full-page size and are too large to post here. If you'd like to see more of his heraldic (and other) artwork, you'll find plenty to feast your eyes on here.
Regards
Arthur Radburn
IAAH Vice-President : Heraldic Education
Top

I simply love his art.
Regards,

Here is a painting Dan Escott did of the arms of The Institute of Heraldry. It's a shame that the Institute of Heraldry itself rarely, if ever, reaches anything like that quality.
Chris Green
IAAH President

TIOH exists for fairly practical purposes, which are not well served by complex and highly elegant emblazonments. Their end result of necessity must be clean and fairly simple templates for mass-produced military insignia, either metal and enamel badges or embroidered patches; or ideally simple and easily recognized arms / emblems / logos for civilian agencies. The nearest to Don Escott's elegant style are beautifully embroidered ceremonial flags, but the design (blazon) of the embroidered arms must still match the TIOH design originally intended for small-scale mass produced badges and letterheads.
Michael F. McCartney
Fremont, California
Top

Further to what Mike McC, said: I was wondering whether Chris's criticism of TIOH's work had to do with quality of design, or quality of artwork, or both.

Mike addressed to some extent the quality of artwork issue. I'd add that, as with any heraldic organization, it fluctuates over time, in large part depending on how much the director cares about heraldry proper. (Some directors have cared more about other aspects of uniforms, insignia, decorations, etc., than about coats of arms.) It is also unfortunate that heraldic enthusiasts rarely see photographs of the original artwork prepared when new regimental and battalion arms are being designed for approval. These were especially good during the tenure of Arthur Dubois (before and during World War II) and Col. Harry Temple (1960s). It was during the latter period that Dan Escott was working at TIOH, and most of what he was doing was this kind of work. An example is the coat of arms granted to the Corps of Cadets of the Virginia Polytechnic Institute (now more generally known as Virginia Tech, Col. Temple's alma mater). This is (I think) a print from the original painting, apparently by Escott:

But there are similar paintings prepared for other unit arms as well, they just are not widely available online. Here's much earlier and simpler one, but still clearly of high artistic quality, prepared for the 100th Infantry Battalion under Dubois's tenure during WWII: 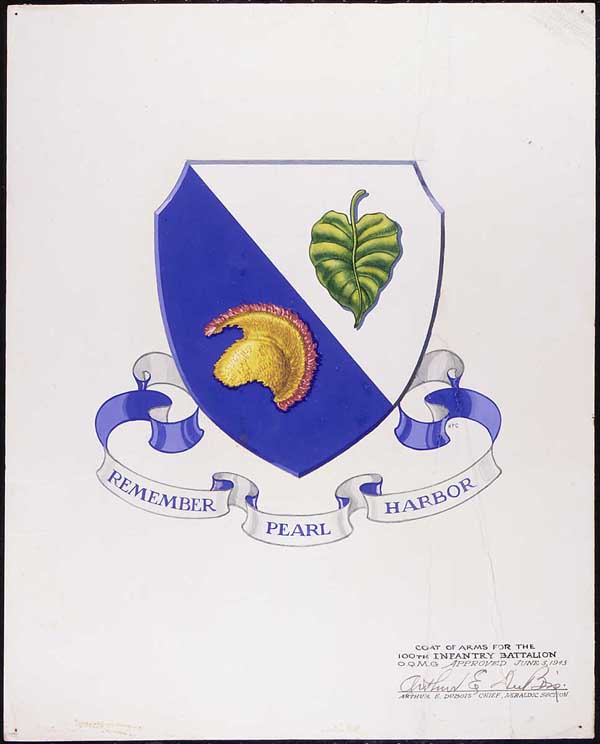 I've seen a few of these in TIOH files. I know that under the current director, Chuck Mugno, there's been a concerted effort to ensure proper preservation of this kind of thing, and I think a lot of the original artwork has been transferred from TIOH's functional working files--utilitarian but hardly of archival standard--to the National Archives, where it can be properly stored and preserved. That's where the painting for this coat of arms comes from.

As for standard of heraldic design, we've been round and round on that over the years. I'd say it ranges from superb to deplorable, with a close correlation to the degree to which the director is able to assert TIOH's authority vs. the degree to which he feels compelled to defer to other constituencies. In large part, that too is a matter of personality.
Joseph McMillan
Alexandra, Virginia, USA
Top

I was probably being unfair to TIOH. Dan Escott's emblazonment of their arms was high quality work for display purposes. He was not however responsible for the design, which is fine traditional heraldry. As has been pointed out, much of TIOH's work must of necessity be displayed in a simplistic format and therefore is of necessity not up to the draughtsmanship of Mr E. If I have a criticism of TIOH it is of some of their designs, which are sadly not fine traditional heraldry.
Chris Green
IAAH President