An unusual design : the arms of the Worshipful Company of Scientific Instrument Makers (in London), granted by the College of Arms in 1956 : 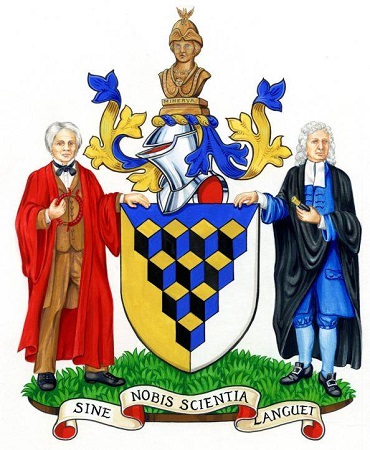 Arms : Tierced in pairle Azure, Or and Argent, ten cubes conjoined in perspective 4, 3 ,2 and 1, the tops also Or, the dexter and sinister sides Sable and Azure respectively.

Crest : On a wreath of the colours, an antique bronze bust of Minerva proper, the eyes Argent.

Supporters : On the dexter side a figure representing Michael Faraday habited in a festal gown of a Doctor of Civil Law of the University of Oxford and holding in the exterior hand a representation of his coil proper, and on the sinister side a figure representing Sir Isaac Newton habited in a gown of a Master of Arts of the University of Cambridge and holding in the exterior hand his telescope also proper.

Well, at least they didn't blazon it as "Per pale or and argent a pile dancetty azure charged with four bars fusily fesswise or, the interstices paly fusily bendwise sable...." oh to hell with it!
Joseph McMillan
Alexandra, Virginia, USA
Top