Chris Green wrote:
How many people have made that mistake?!

Such a mistake is easy to make and hard to rectify, one has some sympathy for the designer of the arms. Similar mistakes occur with British titles; at a recent Cheshire Heraldry Society meeting, the armorial bearings of John Bridgeman, Bishop of Chester were discussed and one of our members commented that the arms were of the same family as the Earls of Bradford. The discussion began to divert onto the Civic arms of the city of Bradford in Yorkshire from whence it was assumed, incorrectly, the earls took their title. I let the discussion on the Civic arms continue, because it was interesting, but the pedant in me had to eventually interrupt. The good Earl is Earl of Bradford in the County of Shropshire.
http://www.british-history.ac.uk/vch/sa ... 1/pp93-104
Martin Goldstraw
Cheshire Heraldry
http://cheshire-heraldry.org.uk
Top

Well, maybe I criticized too quickly. Looking at Wikipedia, Richmond-upon-Thames is named for Richmond Palace, which Henry VII named after his earldom of Richmond--in Yorkshire! Whether or not Pierre de Chaignon La Rose knew that I have no idea. He explained the design rationale in the Ecclesiastical Review in 1913, and didn't mention that part.

Nice arms, though, both of the town and of the diocese.
Joseph McMillan
Alexandra, Virginia, USA
Top

The final day of the Tour de Yorkshire starts at Halifax and finishes at Leeds.

Halifax is now part of the Metropolitan Borough of Calderdale whose arms are: Blazon:
Arms : Vert a Paschal Lamb proper supporting over tne shoulder a Cross Staff Or flying therefrom a forked Pennon of St. George between in chief a Bar wavy Argent charged with a Barruret wavy Azure and in base a Rose Argent barbed and seeded proper.
Crest : On a Wreath Argent and Vert out of a Mural Crown a Rose Tree of nine branches proper each terminating in a Rose Argent barbed and seeded proper.
Supporters : On either side a Lion Or gorged with a collar wavy Azure and holding aloft in the interior forepaw a Crescent Sable.
Motto : "Industria Arte Prudentia" (By industry skill and foresight).

The crest's nine white roses recall the nine authorities that make up Calderdale. The paschal lamb (featured in the crest of the old Halifax arms) has a secondary meaning referring to the wool industry.

The old arms of the County Borough of Halifax were quite different: Blazon:
Arms : Chequy Or and Azure a Man's bearded Face affrontée [the eyes closed] surrounded by a Halo proper.
Crest : Issuant from a Saxon Crown Or a Mount Vert thereon a Paschal Lamb proper holding a Staff Gold flying therefrom a split Pennon Argent charged with a Cross Gules; Mantled Azure doubled Or.
Supporters : On either side a lion Or holding with the interior paw a Rose Argent barbed seeded stalked and leaved proper.
Motto : "Except the Lord Keep the City".

The arms in the blazon were granted as late as 1948 having been assumed at some time during the 19th century, when - most unusually for English arms - they included the words "Halez" above and "Fax" below the face (Halez Fax meaning Holy Face). The face was that of St John the Baptist, patron saint of wool merchants. The 1906 cigarette card illustrates the assumed arms as well as the Latin version of the motto. The chequy field is a reference to the great Anglo-Norman family of Warenne which held the land in medieval times.

The City of Leeds also has arms referring to the wool trade, but in this case by means of a golden fleece: 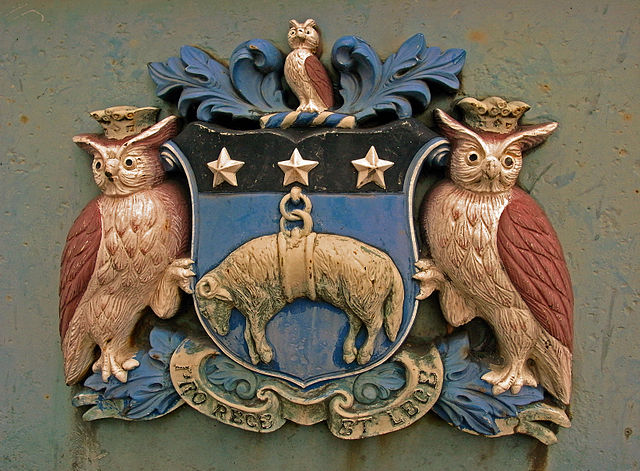 Blazon:
Arms : Azure a Fleece Or on a Chief Sable three Mullets Argent.
Crest : On a Wreath of the Colours an Owl proper.
Supporters : On either side an Owl proper ducally crowned Or.
Motto : "Pro Rege et Lege" (For king and law).

The overall winner after four stages of the Tour de Yorkshire 2018 was Greg van Avermaet, who comes from Lokeren in Oost Vlaanderen, Belgium.

The arms of Lokeren are:

Chris Green wrote:
The eight white roses refer to the former authorities that made up the present Metropolitan Borough. I have not come across heraldic roses "barbed and seeded proper" before.

I have, I thought they were pretty common, and the same as barbed Vert and seeded Or
Top
Post Reply
15 posts