From about the 1850ies the Chief of the Russian Heralds Office Baron Boris Köhne (or Kene to the Russians), developed a heraldic system for the Civic Heraldry of the Russian Empire. One great change was to remove the Chief that previously had showed the Guvernorate to which the Municipality belonged. The Governorate Arms was the restricted to a Canton. Capitals of Guvernorates didn't have this Canton and thier Arms ws for the External onrnaments identical to that of the Governorate. On the shield was placed a Mural Crown in differnet coloura and with differnet numbers of tines. Cities had golden Crowns with three visible tines, minor settlements a red Mural Crown with only two tines. Further the Shields of the two Capitals St. Petersburg and Moscow was ensigned with a Imperial Crown. Behind thier shields was also placed two Scepters in saltire, these was also used by other Imperial Residential Places like Tsarkoye Selo. Other Cities and Municipalities had differnet symbols behind their shields, Industrial Centers had sledgehammers in saltire, Mining Centers hand Mining Axes, Ports had Anchors in saltire, Agricultural Centers had a two Shears of Wheat, Centers of Wine growing Areas had Wine branches.

If the Municipality was a Fortress the shield was placed on two Colours Or charged with the Imperial Eagle Sable. The Imperial Eagle was also seen standing on the Mural Crown. Arms of Governorates was ensigned by an Imperial Crown and surrounded by oakbranches bound by a Ribbon Azure. The Ribbons tieing the external ornamentation of the regular Civic Arms was Gules and in some special instances Azure.

Arms of the Khrakov Governorate, approved 5 July 1878. This Arms only lasted until 1887 when the old one was reinstated : Vert a Rod of Mercury Or and a Horn of Plenty Or in saltire. The reason for the change in 1878 was that Köhne didn't like the rod of Mercury as Mercury not only hade been the God of Commerce but also of Thieves.
Top

In the Russian Empire there also existed Oblasts wich was administrative Areas separate for that of a Governorate. Thier Shields was ensigned by a Crown consisted of three leaves alternating with two Orbs on a ring Or. The Shield is surrounded by a wreath of Oakleaves Or bound by a Ribbon Gules.

Arms of the Amur Oblast. 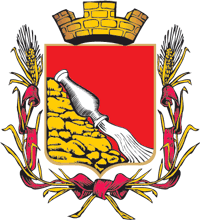 Proposal for the Arms of Voronezh, a Governorate Capital. It should be noted that the Köhne system had not been fully implemented at the fall of the Russian Empire in 1917. Thus many Municipalites continued to use older style Arms.

Arms of Nikolaevsk-na-Amure approved 1912. This shows the insignia of a Port City. The Canton shows the Arms of the Primorsk Oblast. Arms of the City of Moscow.

Proposal 1859 for Arms of Peterhof (another Imperial Residence). Today Peterhof uses a variation of these Arms without the external ornaments and the St. Petersburg Canton.
Last edited by Marcus Karlsson on 19 Dec 2015, 16:32, edited 1 time in total.
Top Arms of Osh (now in Kyrgyzstan) approved 1908. The Canton shows the Arms of the Fergana Oblast. Here you also can see the ornaments for a Municipality in a Wineproducing area.

Arms of a Municiaplity with a Fortress here Daugavpils (Dünaburg) in the Vitebsk governorate (Arms in the Canton).

External oranments for a Harbour City here Poti (now in Georgia the Cacuasus Republic not the US State). The Canton shows the Arms of the Kutais governorate. This shows the Golden Fleece as it is tought that this is the location of Kolchis, where Jason and the Argonauts went to collect the Golden Fleece. Not seen to clearly is thet the Fleece is hanging from a ribbon in the Old Russian Imperial colours Gold-Balck and Silver (or Yellow-black-White).
Top

Another Harbour City Vladivostok Arms from 1883, the Sinister Canton showing the Arms of the Primorsky Kraj.
Top

Armorial Berings of Maikop in the Köhne system.
Top 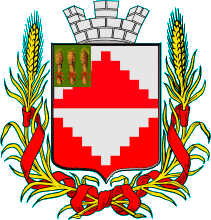 In 1861 Köhne also made the following proposals for municipalities in the Penza Governorate.