The English looks a bit thin; something like Gules an Ermine passant proper, flying from its throat a Scarf ermine doubled or perhaps?

There are several other images of these arms at http://www.ngw.nl/heraldrywiki/index.php?title=Vannes

IMO, your English blazon is better, as it makes it clear that the scarf is flying -- as appears to be the usual depiction -- and not merely hanging around the animal's neck.

Chris Green wrote:On the way from Vannes to the finish at Plumelec lies Monterblanc. Would anyone like to essay an English blazon of this CoA?

I can't say I have ever seen ermine on a green field before. Tincture "rule" would suggest that it is anomalous.

"Armes doublement fautives" is a good comment. These arms are doubly faulty : black ermine tails on green, and black key and arches on red.

I see that the palace at Vannes is called le Chateau de l'Hermine formerly a castle and home to the Dukes of Brittany. For the CoA of Vannes to feature an Ermine is therefore quite logical.

Thank you Arthur for your comments on the arms of Monterblanc. I was so fascinated by the odd ermine with a field vert that I completely overlooked the tincture clash of the sable charges on gules! "Armes doublement fautives" was of course not intended to be part of the blazon , but a criticism of it playing fast and loose with the tinctures. (My French teachers would not have been surprised at my failure to spot this!)
Chris Green
IAAH President

Today (13 July) is a well-earned rest day for the Tour de France, so I thought I would look back at the stages that had already been completed when I started this thread.

Stage 2 was from Utrecht via Rotterdam to Werkeiland Neeltje Jans in Zeeland. On their way the cyclists passed through the city of Gouda, well-known for its cheese. Gouda's CoA looks like this:

I am not sure whether the vine shoots are intended to be part of the supporters, some symbol of special meaning, or simply decoration.

Stage 4 was from Seraing in Wallonia to Cambrai in northern France. The arms of Seraing illustrate why deploying multiple charges such as the lion rampant is not necessarily a good idea:

The emblazonment might have made the saltire less bulky, allowing for slightly more robust lions, but even then they would be puny little creatures.

Stage 5 passed through Peronne and skirted Bapaume. Peronne's arms, with the prominent "P" may well have been designed by the town clerk doodling on a quiet afternoon. Bapaume on the other hand has canting arms that are simple and traditional:

Chris Green wrote:Bapaume on the other hand has canting arms that are simple and traditional:

But does the left hand know what the right hands are doing?
Chris Green
IAAH President

Today (14 July) the Tour re-starts in Aquitaine heading for the Pyrenees. If Aquitaine's CoA looks more English than French that may be because from 1154 to 1453 it was ruled by England. English kings from Henry I to Henry VI were Princes of Aquitaine. Edward III made his son Edward of Woodstock (the Black Prince) Prince of Aquitaine (1362-72) at a time when a more hands-on direction was needed. Richard II appointed his uncle John of Gaunt, Duke of Lancaster (the Black Prince's younger brother) to the position in 1390, possibly as a consolation prize for John's failure to win the throne of Castile. He was however an absentee ruler until his death in 1399. 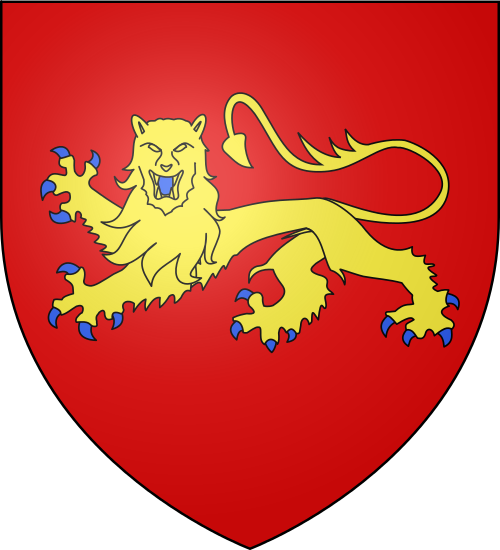 Today's stage passes north of the city of Pau, which was the birth-place of the founders of two royal dynasties, one French, the other Swedish. The future King Henri IV of France ("Paris is worth a mass."), first of the Bourbons, was born there in 1553, and the future King Carl XIV Johan (Bernadotte) of Sweden was born there - in humbler circumstances - in 1763.

Pau's CoA is not easy to decypher:

The H and IV obviously allude to King Henri IV. But as for the rest: an up-turned tortoise-shell, a peacock on a fence, and two crowned cows? What's that all about?
Chris Green
IAAH President

Chris Green wrote:Pau's CoA is not easy to decypher:

The H and IV obviously allude to King Henri IV. But as for the rest: an up-turned tortoise-shell, a peacock on a fence, and two crowned cows? What's that all about?

There's a discussion and explanation of the arms here : http://www.crwflags.com/fotw/flags/fr-64-pa.html .

As the cows represent Bearn, they must be heraldic kin (or should that be 'kine'?) to the cows on the arms of Andorra.
Regards
Arthur Radburn
IAAH Vice-President : Heraldic Education
Top

Today (15 July) the Tour departs from Pau, which I mentioned in my previous post, and passes Lourdes. The CoA of Lourdes recalls a miracle considerably earlier than those known to most of the pilgrims that throng its streets (though hopefully not as the Tour rushes through). Wiki succinctly recounts the story of the conversion of Mirat the Moor:

During the 8th century, Lourdes and its fortress became the focus of skirmishes between Mirat, the Muslim local leader, and Charlemagne, King of the Franks. Charlemagne had been laying siege to Mirat in the fortress for some time, but the Moor had so far refused to surrender. According to legend, an eagle unexpectedly appeared and dropped an enormous trout at the feet of Mirat. It was seen as such a bad omen that Mirat was persuaded to surrender to the Queen of the sky by the local bishop. He visited the Black Virgin of Puy to offer gifts, so he could make sure this was the best course of action and, astounded by its exceptional beauty, he decided to surrender the fort and converted to Christianity. On the day of his baptism, Mirat took on the name of Lorus, which was given to the town, now known as Lourdes.

The CoA depicts the fortress, with the bird holding the fish in its beak, and a most unusual base of no less than six mountains with gold and silver waves lapping their feet: 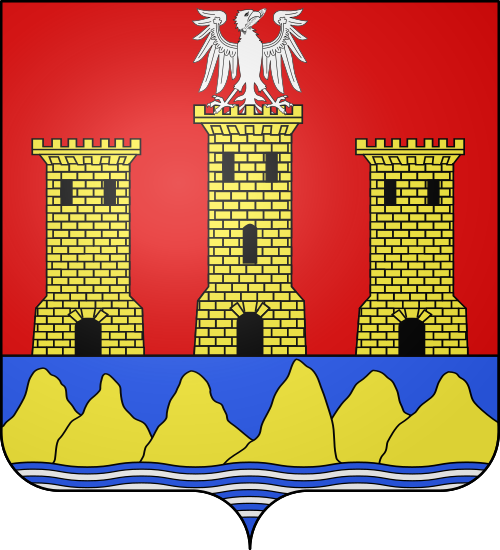 Today (16 July) the Tour is in the Départment of Ariège, which contains some extremely small communes (I found one whose population hasn't reached 70 in the past 50 years). Ariège's CoA is:

Or three pallets gules is very close to the or four pallets gules of neighbouring Aragon and were the arms of the Counts of Foix. Foix is the principal town of Ariège.
Chris Green
IAAH President