Since today is the anniversary of the murder of Lady Jane Grey I thought I would ask if anyone has seen a coat of arms or knows of a blazon for the Nine Day Queen. There is an coat of arms on a tablet memorial attributed as being Jane Grey's arms but are in fact Jane Seymour's.

If there is nothing, what about an exercise of creating some for the wee lass?
Ed Hillenbrand

Now that's a tricky one!

The arms of Grey were: 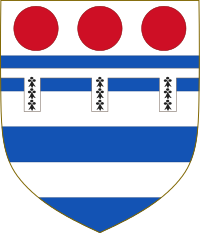 and those of her father Henry Grey, 1st Duke of Suffolk were:

But I think we can probably dismiss them for the arms of a Queen.

Her husband was Lord Guildford Dudley, son of the 1st Duke of Northumberland (whose arms are shown below), but we can safely discount his arms too:

Her great-grandfather was King Henry VII whose arms were: 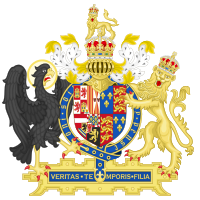 but we can dismiss those as she was married to King Philip II of Spain.

Perhaps the most likely possibility lies in the arms later used by Queen Elizabeth I: 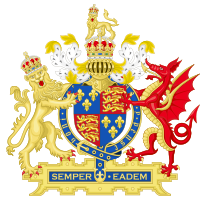 It must surely be probable that "Queen Jane's" arms would have been: Quarterly 1st and 4th France Modern, 2nd and 3rd England and would have had no nod to either husband or family. The question is what supporters would the arms have had? Lion and Dragon? Lion and Greyhound? Or perhaps one or more supporters drawn from her father's or husband's arms. I am still searching for emblazons of those with their supporters.
Chris Green
IAAH President

I would think that her arms were :

Her husband, Lord Guildford Dudley, ought to have borne the arms of his father, the Duke of Northumberland, duly differenced.

Given that Jane reigned for only nine days, she might not have had time to think about supporters to the royal arms.

Looking at Edward VI arms and Elizabeth I they are the same with the exception of the motto. So I would have to presume that if there were any legitimate arms for Jane they would have been the same as both Edward's and Elizabeth's with the possible addition of a black bar of dishonor. I did look at MaryI arms, but they are combined with Phillip's per Wiki.
Ed Hillenbrand

... with the possible addition of a black bar of dishonor ...

Can you seriously imagine a King of Arms proposing a CoA for a monarch that included a "bar sinister"? His career (amongst other things) would have been cut short without a trial methinks. Apart from anything else she wasn't a bastard. She was the legitimate daughter of the 1st Duke of Suffolk.
Chris Green
IAAH President

Well, it depends which monarch you were refering to Chris; from what I understand of the Tudors they threw the term "bastard" around rather frequently. And American's thought our politics are rough.

Edward Hillenbrand wrote:Well, it depends which monarch you were refering to Chris; from what I understand of the Tudors they threw the term "bastard" around rather frequently.

Princess Elizabeth (later Queen) was certainly referred to as illegitimate during the reign of Queen Mary. But we were talking about Lady Jane Grey, who was born in 1537, and whose parents, Thomas Grey (Marquess of Dorset and later Duke of Suffolk) and Lady Frances Brandon, were married in 1533 with the permission of King Henry VIII. Thus there could never be any question-mark over her legitimacy.
Chris Green
IAAH President

"Should" be. Recall, she is never referred to by the Crown as Queen Jane even though she was crowned.
Ed Hillenbrand

Edward Hillenbrand wrote:"Should" be. Recall, she is never referred to by the Crown as Queen Jane even though she was crowned.

Ed: You seem to be confusing illegitimacy as Queen with illegitimacy as in "born out of wedlock". Her legitimacy at birth is indisputable. Whether she was in fact legitimately Queen, even though only for a few days, depends on one's point of view. King Edward VI certainly thought so, as did the 102 notables, including the entire Privy Council, who signed the Letters Patent engrossing his will, in which Lady Jane was named as his heir. They changed their tune overnight when it became obvious that her husband Dudley and father-in-law the Duke of Northumberland were distinctly less popular among the populace than Lady Mary. The fact that, even retrospectively, Jane has never been considered truly Queen stems from the fact that both Mary's and Elizabeth's claims to the throne would have been illegitimate had the Third Succession Act of 1544 been null and void, as Edward VI (or Northumberland) intended.

Jane was never crowned by the way.

None of this however has any bearing on what "Queen Jane's" coat of arms would have been as Queen.
Chris Green
IAAH President

I was trying to be a bit smart alecky about the habit of the Tudors of declaring people "legitimate" at the change in political winds. As to being crowned I actually thought that all British monarchs were crowned privately very quickly to prevent usurpation and that was the main reason why Phillip insisted that Jane be executed: because she had been crowned.

As to the arms of Jane the Queen, alas, I think we have proven that had she had arms for herself as queen they would be very much like Edward's & Elizabeth's. Rather boring considering the times.
Ed Hillenbrand